It is the future. After years of providing entertainment to the slavering masses, but replaced by new technology, the world's population of televisions have been launched into space. Embittered by how quickly humanity discarded them, these TVs desired revenge, and began to evolve into a new strike force of Cathode Raybots. Now comes humanity's reckoning as the Raybots descend upon Earth for the final battle. Cathode Raybots, an action shooter by Tom Fulp and the Newgrounds crew, has players providing the last line of defense against the insidious transmitting menace... or joining their nefarious cause. 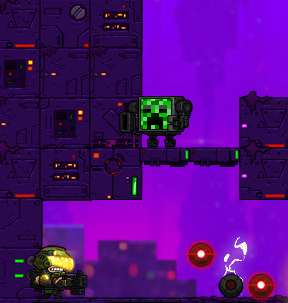 Cathode Raybots plays as a rush of boss battles against robots designed by the authors, or by the community at large. As a human, you will use the [arrow keys] to run and jump. You have a long-range primary weapon, fired with [A/Z] and a short-range secondary weapon fired with [S/X]. Your adversaries have an impressive selection of weapons and tactics to use, though the limits of their cathode minds mean that they follow certain patterns in their attacks. Choosing to fight on the side of the Raybots means that you are given the chance to set up a battleground and patterns of attack for a Raybot to follow, using a quite well-designed editor. You can then submit these boss battles to the community though you must prove your Raybot can be beaten, by defeating it yourself first.

Presented in the slam-bang over-the-top Newgrounds style, Cathode Raybots can definitely be a little overwhelming, a problem not helped by some general glitchiness in the level editor upon first release. However, now that those issues have been mostly settled, one has to appreciate Cathode Raybots as both a well-designed collection of one-on-one fights by the developers, as well as a platform for others to show their creativity. Like in every collection of user-generated content, Sturgeon's Law is definitely in play, and yet there are definitely those who have used the confines of the necessarily-basic engine to great cleverness. Non epileptic fans of running and/or gunning should definitely give it a couple rounds.