A new hidden object mystery game has appeared: Cate West - The Velvet Keys! Following the style, story and gameplay conventions set by Cate West - The Vanishing Files, The Velvet Keys casts you in the role of the young scarlet scarf-wearing author/psychic as she digs through occult legends in search of a way to contact departed souls. It's a great-looking game with surprising variety and an enticing plot that gushes out as the game progresses. 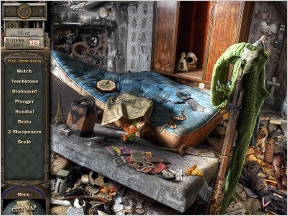 Cate West has the unique ability to see places, people and things associated with items simply by touching them. Naturally, this is quite useful in murder investigations, and that's exactly where Ms. West finds herself in this game. The Velvet Keys begins in an asylum where you look into the disappearance of a former patient, a man you might recognize from The Vanishing Files. Cate uses her ability to search for clues by going through the patient's cell and gathering certain items, hidden object-style. She soon discovers this case may be more complicated than anyone thinks, and after a mysterious man visits her in the middle of the night, things start to get really serious.

Cate West - The Velvet Keys packs a fair amount of gameplay diversity into its unassuming package. Not only are there hidden object scenes, but you'll also have to put items back in their proper places, engage in "spot the difference"-style games, find a handful of one item (locating 15 stars in one scene, for example), and complete a few simple mini-games. You're never stuck in one mode for too long, which keeps the game's pace moving at a steady clip.

At the start of the game you can choose between normal and relaxed mode, the former featuring an in-game clock while the latter is without. In most scenes you have unlimited use of the hint button, and it recharges in just a few seconds, which is nice. Be warned, however, that with each use you decrease your points bonus at the end of the stage. Sometimes one more glance at the scene can be well worth the time. 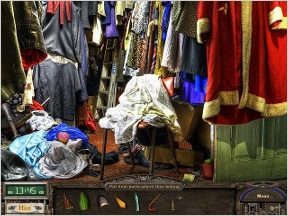 Analysis: The Velvet Keys had me from the first scene in the asylum. While there were fewer crazy characters and wild conspiracy theories than I would have liked, the story spun by Cate West still captured me from chapter to chapter. It has an intriguing murder mystery/police drama/Da Vinci Code vibe, paired with Cate's psychic powers which makes the whole set-up possible.

The plot will have fans of The Da Vinci Code a little excited, as Gamenauts has woven quite a bit of arcane legend into this tale. Sometimes what the story asks you to believe is a bit far-fetched (one of the characters actually points this out, which made me feel a bit better), but it's all fair in the spirit of the game. I couldn't help but notice the dialogue was more expository in nature, with characters popping in and spouting things like "Ok. I just opened the cabinet.". It's a fair substitute for expensive cutscenes, but the game leans on them just a little too heavily.

Even though Cate West is a story-driven game, there are a number of points-related features present, including a penalty for frequent mis-clicks, chain bonuses, hint bonuses and more. Normally I couldn't care less about accumulating, but the ending you get is based on your score ' a mechanic I could do without, although some gamers will appreciate the challenge. I don't think a story should revolve around something as non-story-related as your score.

Just like its predecessor, Cate West - The Velvet Keys paints an intriguing mystery with varied gameplay and great artwork. The emphasis on scoring points and its affect on the ending is unfortunate, but the game draws you in so well you'll hardly notice.

Hint: Try working from the end, connecting the circuit until you reach the beginning.

Hint: The empty space will be in the bottom right. Try completing the top row first, then moving the bottom five around.

AND a hidden object clone. That, my friend, is style.

amenos42: By your logic, every game could be called a clone of some other game. It's not like game designers are creating new genres here, so yes, everything we feature (including browser games) will probably resemble another game in some way. We don't make the games, we just sift through them all and show you which ones are worth playing. The point is, this game is good, so there. :-P

When I saw the title I was so excited, you wouldn't believe it. I loved the first Cate West game, even with my quibbles about not liking them throwing the people being mind controlled into jail. For one thing, it was such a good value.

But, my religious beliefs just will not allow me to spend money on something that I consider blasphemous. So I need to know before I get this: by "legend of the Da Vinci Code" do you mean "Jesus fathering kids"? Because if that's what you mean, I'm not interested, and I want to know in advance.

joye: Don't worry, Cate West isn't THAT similar to Da Vinci Code. All I was saying is that there's a similar vibe of ancient mystery and legend. No specific religious content at all. I highly doubt you would find any of the game's content to be blasphemous.

Ahhhhh ok. Phew. Then I will definitely try the demo when I get settled in my new place. :D

Getting a final score over 400 000 gave me the 'best' ending, as stated by the game. Does anyone know the score ranges for the other ending(s)?

"Even though Cate West is a story-driven game, there are a number of points-related features present, including a penalty for frequent mis-clicks, chain bonuses, hint bonuses and more. Normally I couldn't care less about accumulating, but the ending you get is based on your score ' a mechanic I could do without, although some gamers will appreciate the challenge. I don't think a story should revolve around something as non-story-related as your score."

I have to say I find some amount of disdain for this comment. Video games are meant to be played. The story, gameplay mechanics, characters, level design, artwork, all of this is to get the game played, and draw the player into the experience. Video games are not just interactive books, they are a media all their own. Now of course story is a large part of any game, and alot of times nowadays it is the story that draws us in and keeps us playing, but the story is not the game. Video games have been trying to find their niche in society for over 20 years now, and still people are regarding them as mere stories with a controller. Video games deserve so much more credit than that, to judge a video game on it's story, is to miss a vast portion of the game itself. I feel that by saying "I don't think a story should revolve around something as non-story-related as your score." is to be detrimental to the game itself. The game is not a story, it is a game, and should be judged as such; that is my belief.

Hint: Try working from the end, connecting the circuit until you reach the beginning.

Hint: The empty space will be in the bottom right. Try completing the top row first, then moving the bottom five around.

Re: spoilers.
I note that in your spoilers for the puzzles, you use - for example 2 left, 1 space, 5 up, 7 right, etc. I cannot locate any lettering on he ossary - and wonder where you arrive at the numbering?

BethL - The numbers correspond with labels in the screenshots accompanying the spoilers in the walkthrough.

I just finished this game and honestly didn't think much of it. Started skipping puzzles towards the end just to get it over with but still got the "best" ending. Can anyone spoil the other endings for me? I get obsessive over things like that but can't bear to play this again.

has anyone played Cate West The Vanishing files? the blacked out puzzel on level 9? grrr.

Got stuck on chapter 6 played relaxed game. Last item pirate hat is obscured by camera in my picture I have seen it on the hints but no matter how many clicks i make it wont find it. I enjoy the games but I guess this will be a delete. unsatisfied!

I got the second ending:

They revive Wesley, (who ends up not being as bad as it seemed) and Cate vanishes. Suddenly, a cloaked man shows up and reveals himself as Cate's dad, who combines the 12 Velvet Keys and brings Cate back to life. Ben, Cate and Nina hear Wesley and James' explanation that the people they revived were "The Keepers", who aren't very nice people at all, and that Johann has been using them. They go to his church and find Johann, who threatens them, but Ben captures him, while Cate and James use the new key to make the Keepers die again. Nina takes Johann into custody, who only wanted to revive his sister, and James leaves, saying there are more sinister keepers and he needs to keep on chasing them.

If anyone can tell me what the best ending is, great!!!!