Richman Stewart's Cat Ninja is one of those weird high-difficulty action games that walks the line between too-cute-to-quit and "I WILL END YOU". As a cat on a quest to save the world by collecting crystals, you have your work cut out for you in a hostile realm full of lasers, land mines, spikes, sticky goo, and more... not to mention one of those trendy sassy narrators who mocks you when you fail. Initially, all you've got are your paws and claws for the basics... the [arrow] keys make you run and jump, with double-jump, wall-jumping, a mighty Mario-esque butt stomp to break glass and press switches, and a fast rolling ability triggered by holding the down [arrow]. All cats have tricks up their sleeves, however, and this feline is no different. How about a jetpack? Switches that rotate the level around you? Switches that flip your gravity? If you should die by some unfortunate means, you'll be booted back to the start of the level or the last checkpoint you passed. You can also restart a stage with [R], and in either case, you'll get to keep any crystals you picked up beforehand. 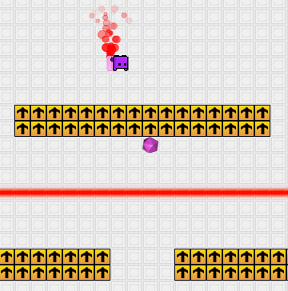 Cat Ninja is one of those games best suited for players who delight in difficulty and misdirection. From the way it mocks you when you die, threatens you when you pause the game, and deliberately tries to get you killed, it's clear the game itself is working against you, and only fast action will keep you alive. The one-hit KO will be a turn-off for some, as will the sparse level design, but the way each stage is carefully crafted to test your increasing confidence with new objects keeps things fresh for fans of the challenge. Unfortunately, there are aspects of movement and mechanics that seem a little imprecise... you need to be dead-on in your butt-aim to trigger red buttons, for instance, which can take some fiddle maneuvering, but even then it doesn't always seem to register the first time. You'll need real split-second timing to get around some obstacles, especially in later levels, and it can feel like your feline hero slides just a hair too much when you stop moving at times. But with an enormous amount of challenging new objects and deadly hazards to keep you on your toes and some punishing level design to take advantage of them, Cat Ninja is still an oddly addictive and clever addition to the genre well worth checking out.

Thanks to Matt for sending this one in!

There seems to be a bug with

Well, it seems this game has no save function. That's pretty much inexcusable for a game of this length.

Aside from that, it seems (as far as I got) like a pretty good example of how a game can be high-difficulty, but not cheap, or as some call it, punishing. The platforming is slightly slippery, but the level designs are generally put together with that in mind. The game is naturally fast due to the slipperiness, so the primary challenge is knowing just how and how much to slow down to get around the obstacles.

hm..
got 90 deaths 50 odd crystals in. some of the levels were downright unfair (the one where it throws you up without letting yousee what was coming), to the level i had to rage quit in... where you had to some how trigger the 'sideways' spikes so you could climb the wall they were on. So jump down, run UNDER falling spikes, go up a wall avoiding fixed spikes run DOWN a tunnel to trigger more falling spikes... then deal with spikes that fly sideways? double jump... barely triggers them. wall jump? launches you into their firing lane... gave up.

How do you cross the level that has teleportation portals? I went to a room with the upside down portal, but I can't seem to enter the portal.

Use the second portal at the beginning of the level. But for some reason, it didn't work for me the first few times

Very nice game. I thought the controls were just slightly loose given the precision required on some of the levels. I really appreciated the difficulty towards the end - it challenges your instinct to rage quit at points and rewards you for completing. I would slightly change the last boss - when you hit him for the last time, you don't bounce back up on to the ledge as with previous times - you fall through. I had to beat him a couple times (and die about 50 times) to defeat him and survive. Also, you might consider changing the color of missiles - sometimes the lighter shades don't show up clearly (at least on my screen) and they're hard to see moving around. Looking forward to the next iteration! -M

could anyone give me insight on how to defeat the boss? one of the comments said he hit him, but when i touch him i die, and i thought if you keep dodging his missiles/bombs something would happen eventually. I have come so far, please give me some insight!! thanks!

To Asheil, to get past the sideways spikes run all the way up the opposite wall(above the tunnel).

This seems like a pretty fun game for those who like a challenge. It's hard, but some people like playing difficult games for the (illusory) sense of achievement at the end, and such people are clearly the target audience here.

However, I had several complaints.

dodge the colored projectiles and bombs, then jump on him when he hovers near the precipice.