Opposable thumbs are so awesome. We can twiddle them! Oh, and we can also hold stuff. Which brings me to Cat Around Africa, an adorable physics puzzler from Alma Games, where the protagonist is a cat, a creature known for its woeful lack of any thumbs whatsoever. This wouldn't normally be a problem, but our kitty has gone on a trip to Africa, where all the food is somehow trapped in elaborate puzzle mazes, and the kitty can't work them. That's where you and your nimble hands come in: you will push buttons, move stones and break ice blocks while the feline is eagerly awaiting snacks. 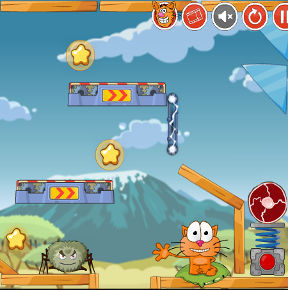 Last time we saw the kitty, it was in Asia. This time we will visit everything from Tunisia to Tanzania, eating figs and coconuts. The puzzle elements are largely unchanged, and it bears a clear resemblance to its predecessor. As before, every level has three stars you can pick up if you're looking for a bigger challenge. Many levels are scrollable, which can be a bother when it comes to physics puzzles, but in this case it manages to work rather well. Cat Around Africa is more intricate than its Asian counterpart and the puzzles require some planning ahead, unless you want the kitty's lunch to end up electrocuted. There is also a noticeable graphics upgrade, resulting in a more polished, smoother, fluffier presentation. While this episode doesn't innovate as much as the previous one, it's still a lovely, heart-warming little experience (much like playing with actual cats), so it's certainly worth a few minutes of your time.

Am I the only one that is having the game scroll up/down or left/right on it's own? It makes it rather difficult to click the right spot at the right time when the game is shifting around on you.

Yes, the game tries to refocus the screen on the food. It's a bit obnoxious.

What LightWarrior said, plus the screen fights me when I try moving to a different part of the puzzle -- it keeps moving back to where I don't want to be/see on its own.

Views
0 Comments
jayisgames.com— Do you know which are the most popular games to enjoy on vacations? To answer you, we explored the networks which are the ones that the players enjoy the most. We have found true classics. Do you want to...  ...