Sometimes deciding whether a game qualifies as "casual" isn't that easy. First Jay goes and meets with our secret "contact" in the secret parking garage behind our secret headquarters at midnight to get the secret coordinates. Then Kyle has to follow them to the ancient jungle temple in South America where he holds the undead army of the sorcerer-king Umbultak at bay using the Scimitar of Jess while Kate deciphers the ancient runes on the Altar of Casual Gameplay. And Psychotronic wrestles a baboon because... uh... hmmm. You know, I actually don't know why he always does that. Huh. Anyway, it's a very delicate process! Thankfully, Casual Space, the newest game from Steel Panda, has saved us the trouble by including the word "casual" right there in the title! Which is actually quite deceptive, since over forty levels, bonus stages, boss fights, upgrades and more means this is one big adventure. 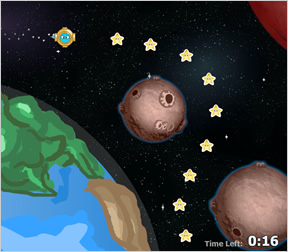 Casual Space tells the story of the once-peaceful planet of Capium, whose sun-star was attacked and shattered one day by the evil Space Armada and scattered throughout the vast galaxy. Presumably because this is what evil Space Armadas do, but perhaps also because they think a planet filled with tiny creatures made of water is an easy target. Well, one small hero in one small ship is about to prove them wrong as he sets out to gather the missing star pieces and preferably not explode along the way.

The controls in Casual Space are handled nearly entirely with the mouse. The ship follows your cursor around the screen at a short distance, leaving it up to you to navigate a path around obstacles. Clicking the right mouse button activates Power Mode, which causes your hero to do the water alien equivalent of hulking out and turn bright red, dashing after your cursor and smashing through ice and enemies for as long as the red power bar holds out. Just watch out for things like asteroids and planets; the damage you take is determined by how fast you're going, so keep that in mind when you're Knievel-ling about the spacescape.

In most levels, the objective is to collect all the star pieces to open a portal to the next stage. You can see how many you need in the upper-right corner of the screen. Stars can be anywhere, from floating around in small groups to encased in chunks of ice you'll need to break open. Once you have all of them, you can head straight for the portal, or you can pick up the other gems hidden around for extra points to spend on upgrades between levels. Just make sure to keep an eye on your time.

Occasionally, you'll come up against a boss fight, which is a welcome change of pace that I wish had happened more frequently. Your enemies are thoughtful enough to leave out floating signs that hint as to their weaknesses, but it's still a nice added challenge. Looking at the big, beautifully detailed maps gives you a hint as to what's coming up next, and I found myself eagerly looking forward to each new area. 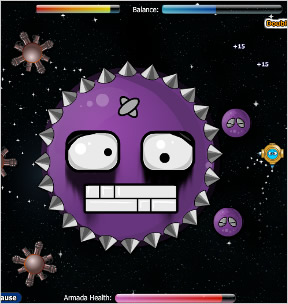 Analysis: Space expeditions would be a lot more frequent if reality were as colourful as this. Zipping along through the surprisingly lovely backdrops to the Willy Wonka-esque soundtrack while you collect adorable little stars is sweet enough to induce a sugar coma at times. Thankfully, the game manages to balance its quirky, kid-friendly presentation with some genuinely challenging gameplay.

One issue I have is that the collision mechanic seems a bit overzealous. Not only space anomalies, but everything from the ice to asteroids will send you ricocheting backwards like it's made of rubber or jell-o. (Mmmm, space jell-o...)

You know how two-year-olds can be playing quietly together one minute, and then the next one of them has cracked the other over the head with a Tonka Truck for no reason? Casual Space can be like that to you. Midway through the first map, there are several levels where the entire play field is constantly in motion. Dodging all the flying obstacles while trying to grab the stars which are also moving seemed almost impossible at times. Oh, Casual Space, why do you hurt me when I love you so much? Thankfully, the game immediately presents you with several lovely levels to make up for it, and it only gets better from there.

Yes, it's true, I found the game to be pretty addictive. While I wish the difficulty curve would make up it's mind, when you find your rhythm for a particular level, it just works. I love the bright, cartoony presentation. I love the way the game paces itself by adding new things every level to keep things interesting. Casual Space is a sprawling adventure filled with lots to collect and unlock. People with a steady hand who like a challenge will find a lot to enjoy about it and will stay busy for a long time. Just don't forget to wear your spacepants. I'd let you borrow mine, but, well, you know... I had them specially made.

The game is also available to Play at Kongregate

I can't get past that armada guy, the one in the picture above. I can get the missiles to hit him, but they don't do any damage.

One thing i dislike about this game is the damage. I don't really understand what the "balance" is, but I do wish there was a shield so that one teensy scrape from an ice block wouldn't set you back to the beginning of the level. I do like how there are unlimited lives, though!

i found the best way was to get rid of the extraneous guys and stars, then lead a missile from the top bomber around and down on top of the big guy's head

i did it, but then i hit an iceblock and died :(

Also, the music sometimes reminds me of the episode I pod racer loading music.

I feel like a dork but I can't get past the first level. I complete every task that I can see (grabbing stars and shiny glimmers, breaking the ice, gathering up gems), I open the portal at the end and shoot my little guy into it, and then...nothing, no next level.

That shouldn't happen, Ryan. You should go to a screen tallying up your score. Maybe it didn't load properly?

One thing that confused me was buying upgrades. It won't let you do it until you can actually afford it, turns out.

Casual? Ha! This is one of the most frustrating games I've played. I've spent more relaxing evenings being attacked by monkeys.

Well, this is a really straight rip-off of Peggle. Not nice