A collaboration between Adult Swim and the adorably monicker'd Grumpy Face Studios, strategic defense game Castle Doombad, available for iOS and Android, has been out for a while now. In it, under the not cute whatsoever direction of Dr Evilstein, you're in charge of placing all manner of foul traps to fend off and destroy the heroes assaulting his castle to try to rescue the Princess, whose screams you're harvesting to fund trap production. Completing levels earns you coins you can spend on purchasing new traps and equipment, or upgrading your existing ones, because if there's anything better than cute, puppy-like devouring minions, it's cute, puppy-like devouring minions that are also on fire. As of today, however, Castle Doombad: Free-to-Slay hits, and as the name implies, it's a free incarnation of the game, but don't start curling your lip in disgust just yet. Though supported with ads between some levels and the ability to remove them for a flat fee, what the free incarnation doesn't come with is a whole lot of aggressive rebalancing designed to lean on you hard and force you to cough up extra cash. Though challenging, it's never unfair, and with a fantastic vibrant design and oodles of fun traps to unlock, Castle Doombad might just show free-to-play doesn't need to be a bad thing if developers are this dedicated to working with their players rather than against them. 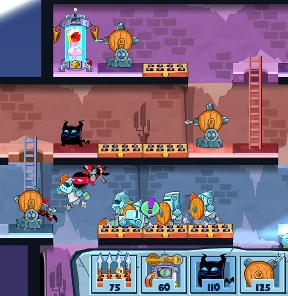 Though it can wind up feeling a little repetitive as it's slow to deal out new enemy types, Castle Doombad is largely as fun to play as it is to say. (I like to flicker the lights on and off dramatically and follow it up with some maniacal laughter.) There's no option to speed levels up, but they quickly become so busy you wouldn't want it regardless as you can't place traps while paused. Enemies can throw ladders up to windows to come in through other floors, and the different types of enemies will keep you on your toes too, from ninjas who can crawl on ceilings to those who can disarm traps and more. It can get more than a little chaotic, especially with some traps that have to be manually triggered and dropped screams or coins to be nabbed, so it's a good thing most levels tend to be on the short side. You'll need to make it through without having your Princess picked up even once to earn a stage's crown, and since crowns are used to unlock special stages and other chapters, that's sort of a big deal.

We can talk about the visuals, and we probably should since they're fantastic. Castle Doombad is practically oozing charm and professional polish in every aspect of its design, and it's impossible not to smile as you play. From the Sexy Knight who pauses to take selfies astride his tiny (yet also sexy) pony, to your cheerful slavering minions who perk up when an enemy gets close, Castle Doombad looks and sounds great. But what's even greater, perhaps, is a game providing a free-to-play option that doesn't feel like a shakedown. Developers, of course, deserve to be paid for their work. It takes an amazing amount of time, effort, and talent to create even the simplest game. Too often, free-to-play games wind up strongarming you into forking over cash by having imbalanced gameplay or "special" currency or timers that restrict. That Castle Doombad: Free-to-Slay doesn't do any of that is sort of remarkable. You can buy more currency, sure, but it's readily earned through gameplay, or you can just choose to watch twenty second commercials until you get bored for 50 coins a pop. The blue coins are used to purchase more special powers, but you earn those through gameplay too, and you can also convert your other currency to get them. Even if you do fork over some cash for coins out of impatience, the prices are actually pretty reasonable.

While Castle Doombad is a rock-solid and gorgeously designed little tower defense game, it also deserves some recognition and applause for trying to turn a payment model that usually causes players to hiss in revulsion into something... actually sorta okay. The original version is still available, but no matter which one you pick up, you'll still have a good time. Remember, kids... support your friendly neighbourhood game developers, and they'll support you right back.