Last year we featured an amazing little game called Caster in our Weekend Download lineup, although we might have jumped the gun... in retrospect, some of us here at JiG totally fell in love with this independently-developed 3D action-shooter, vowing to give it the full review it deserved when the second episode eventually came out. Last week, game developer Mike D. Smith of Elecorn unveiled Caster Episode 2; the second in an ongoing series of free content updates for the original game. Episode 2 is more than just a handful of new levels, though; Smith added new art and visual effects, revved-up the performance and introduced a variety of new gameplay elements (including a level editor and support for community mods). More than a year after its original release, Caster Episode 2 offers the perfect opportunity for players to check out one of the best indie games of 2009 that might have flown under their radar. 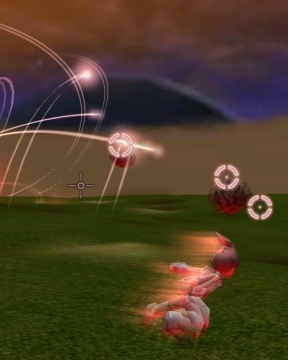 Caster is a third-person action-shooter with distinct influences from the glory days of console gaming; it cooks up some of the most-enticing features of high-energy, super-powered shooter action and serves it up on a silver platter. The story and premise are pretty much dwarfed by Caster's hyper gameplay, vivid graphics and thumping soundtrack... something about an insectoid race called the Flanx posing a threat to the ecosystem? After the first few levels, it won't really matter; you'll be having too much fun running up the walls—literally—and blasting bad guys to remember.

Caster isn't completely about running-and-gunning, though; there's a specific task in each level that needs to be completed before you can move on to the next. Most of the time you'll have the simple task of clearing enemies or collecting a certain number of glowing orbs, but some missions are a bit more devious and require a little puzzle-solving logic to complete. For example, the landscape in Caster is deformable; two of your weapons have the ability to destroy and create terrain, which allow for some interesting scenarios when you can't directly access an object or destroy an enemy by conventional means.

Our hero is packing an old-school, multi-purpose arm canon; players begin with a basic laser blaster and gain new weapons and functions in later levels. Default movement is controlled with the familiar [WASD] setup, and combat is equally as simple; use the mouse aim and click the left button to fire. To switch weapon types, you can either use the scroll wheel or click the right mouse button, which will pause the action and allow you to select from a cursor menu. As you'll learn in the first tutorial stage, running and jumping is an important—and undeniably fun—part of Caster's gameplay. Double-tap the directional keys (or hit the [shift] key) to start the "dash" ability, which allows you to scale vertical inclines, run across water and other nifty acrobatic maneuvers. While dashing, hit [space] to perform a super jump, or you can activate the power by double-jumping from a standstill. 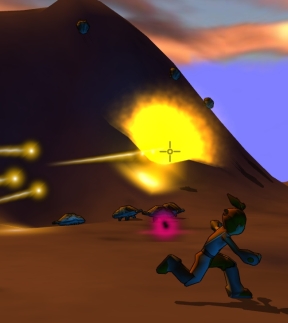 Both your "super" abilities and weapons can be upgraded between levels using the points earned by defeating enemies and collecting orbs. The super jump, for example, can be upgraded to such an extent that by the time it's maxed-out, you'll almost be able to traverse the entire length of some maps in a single jump. Weapons you pick up along the way can be upgraded to enhance their performance; upgrading the blaster will increase its damage, while other weapons will benefit in unique ways, like larger area-of-effects or additional projectiles. Part of the fun is discovering each weapon and learning how to use it, so we won't spoil it by describing them all. But remember that versatility is important; some of the enemies in Caster react uniquely to different weapons and strategies, especially in the newest campaign introduced in Episode 2.

Analysis: When I send an email to my friends about Caster, I usually end up writing something like, "You gotta check this game out—it'll make you feel like a super-hero." Caster is often praised for its exceptional ability to make you feel powerful; it sheds the potential weight of indulgent, convoluted gameplay mechanics and glorifies the player instead. Whether you're even paying attention to your current objective or not, there's something inherently fun about zipping across the landscape at blurring speeds, leaping over mountains and using your weapons as a God-like paintbrush of destruction. Caster also has plenty style; just when you're starting to feel comfortable, the surreal level design, eccentric plot and quirky enemies offer new surprises until the very end. The puzzle aspects help relieve "shooter fatigue" and the boss fights introduce satisfying challenges at just the right moments.

Most action and shooter fans will find the control mechanics fairly intuitive; nonetheless, players have the ability to create a custom layout instead (gamepad support is also included). For a game of its small size, Caster's graphics and animation are surprisingly vivid and polished, and the engine seems to be more optimized and scalable than most indie developments. The recent Caster Episode 2 features seven new missions, a new female character, new graphics, art and music. The latest version also introduced some new gameplay mechanics, added a level editor, community mod support and addressed several performance and control issues. The original Caster is available for Windows, Mac, Linux and even the iPhone. So far, Episode 2 is only available for Windows, but the remaining platforms will be available soon. Players can download and play the Caster demo for free, or purchase the full game for $4.99, which includes future updates and episodes.

What are the system requirements for this game? I can't find them on the website.

According to the Readme text file, the system requirements are "a 1GHz or faster processor, 64MB or more of RAM, a 3D graphics accelerator, and OpenGL 1.1." That's basically any computer made within the last 6 or 7 years. The only real variable is the graphics card, but in this case, I'm assuming "a 3D graphics accelerator" includes integrated graphics, like an Intel GMA.

Like I mentioned in the review, the engine is pretty forgiving and well-optimized. Almost everyone should be able to run it. If you're experiencing a low frame rate, go to video options and reduce the resolution, turn off anti-aliasing, make sure you're running it in full-screen mode and un-tick some of the advanced rendering options.

Has anybody played the demo yet? I was wondering if for certain Power Orbs you have to be "quick" (haha) to get them before

they get covered by water

josh, think about certain weapons you can use to revisit the map

Very nice, though I wonder why

the saved games are encoded in text? They can be very easily modified.

I am quite impressed, though. Will buy, when I can.

You mention here, and several other sites also seem to think, that the full version is $4.99, but whenever I click through to an actual buy page, it says $9.99 - what's up? Did the price change at some point?

Okay, I don't want to hurt this guy's sales, and who knows, for some of you this may not be a problem, but just know that before you put food on his table, this guy is a strong supporter of