In Stolen Couch Games' adventure island sim Castaway Paradise, available free with optional in-app purchases on Android and iOS or for a flat fee via Steam, your grungy, kelp-covered self washes ashore on an island full of animals who look and act like people. No, it's not Doctor Moreau, cease your screaming! It's a cute and casual little game designed to give you a place to kick back and get away from it all. And by "get away from it all", we of course mean "perform countless tasks and heavy lifting for animals who never ever ever help out ever". But we also mean "catch bugs, donate to museums, dig for shells, fish for... um... fish, decorate a mansion, farm crops, and more". That'll do! 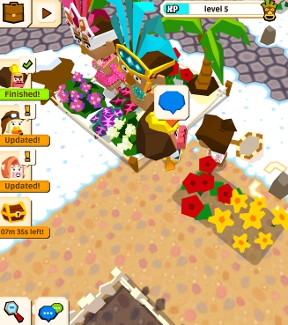 Playing Castaway Paradise is pretty simple. Just click (or tap!) people or objects to interact with them, or to move around the island. Though you don't have anything but the weeds on your back in the beginning, the generous islanders will quickly loan you the tools you need to get started. You can harvest fruit from trees, for instance, and turn around and sell it, or you can plant and water it to grow more over time. Some items can only be used so many times before you need to wait for their stamina to refill, or on a mobile device, watch a short ad to refill it immediately. Most folk will have tasks for you to accomplish and will reward you accordingly, and completing objectives as well as generally puttering about will gain you experience points. Level up, and you'll get a smattering of useful items, and unlock more content as you go. Whether you're playing on a computer or a mobile device, most things in Castaway Paradise still take time. While the game runs on its own when you're not playing it so you can leave and come back later if you're waiting for something to build or grow, you can spend pearls to instantly complete any task. Unlike gems, which are the primary form of currency for buying new items, pearls are given out more sparingly, though you can choose to pay for some via optional in-app purchases. Steam users don't need to buy anything extra, having already paid for the game, and have permanent unlimited water and stamina, too! 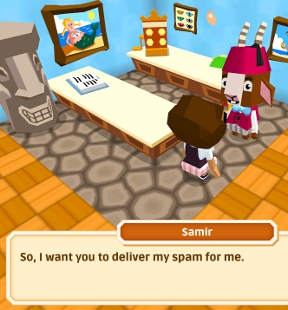 Castaway Paradise's influences are pretty clear, enough so that "It's like Animal Crossing!" is actually mentioned in the official site's subtitle and Google description. For the most part, it's pretty apt, though while the seasons and events on Castaway Island do change over time, it's not quite as dynamic as Animal Crossing where its population is concerned. You'll fish, you'll catch bugs, you'll farm, you'll get yelled at by an angry ape. Castaway Paradise is very low-key and casual, and frankly, I like it that way. It's the sort of game that's made for whatever time you want out of it, and toddling around tweaking the town with decorations or catching things to give to the museum is pretty relaxing. The island opens up a lot more as you find puzzle pieces, which grants you access to different characters and establishments. Though the tone and style is just about perfect for kids, it's funny and engaging enough for players of any age. It's less designed for marathon sessions than to drop in on whenever you feel like it, and things like digging for shells or planting specific flowers to attract different bugs assures plenty to fiddle with even with you're not decorating your house or the town as a whole. The blocky yet cuddly design is easy on the eyes and big on character and colour, making it one of those games that makes it hard to stay in a bad mood while you're playing. If you're playing the mobile version, the game actually has the option for you to become a VIP, which is a subscription that gives you some free bonus items, access to special things in the catalog, discounts, and unlimited water and stamina. You can ignore this, pay a monthly fee, or pay a flat fee and keep the status forever. The Steam version doesn't offer this, largely because you don't need it... you already have unlimited water and stamina, though you'll still have to wait for timers and levels to unlock everything. If you're looking at it purely as a free to play game, Castaway Paradise is a lot of fun, though how often it prompts you to watch ads (albeit for double rewards or other useful things) may irk some players. Then again, developers gotta eat, and making games takes time and money itself. I played Castaway Island when it was first released, and the ability to watch ads to replenish stamina and double so many rewards actually makes it a lot smoother of an experience instead of needing to leave it alone for long stretches at a time. As for Steam, well, you're still going to need to spend your time prettifying the island and helping out the locals to unlock everything, as well as wait for certain tasks to complete, but games like Castaway Paradise and those that inspired it feel best suited to short breaks anyway. It's just a shame that there's no cross-platform play, nor the ability to visit others players.

If you've been craving something cute and casual to escape with whenever you have a spare moment, Castaway Paradise's sandy shores and inhuman islanders are a good choice. It's a lighthearted, go-with-the-flow approach to simulation that makes it a perfect fit for players who want something they don't need to baby every step of the way. Castaway Paradise feels like climbing up into your tree fort as a kid and messing around with all your Lego and other toys, and that's a good thing.

Meh. Looks like a variant of Seabeard by Backflip Studios.

They may look similar, but Castaway Paradise actually predates Seabeard, and is much less aggressive with its free to play aspects besides. :)

Do you have any idea why my game won't produce shells anymore? I have a few I still need to donate and they haven't washed up on the shores in months, almost 8 months!