Cassandra's Journey 2: The Fifth Sun of Nostradamus, like the first game in the series, puts you in the role of Cassandra, a clairvoyant who solves cases with the aid of a mysterious ring and training from her mentor Nostradamus. Conveniently, she solves her cases by spotting hidden objects in various settings. Cassandra attempts to divine the location of her missing boyfriend but gets overwhelmed by a malevolent, evil presence and knocked out. While she sleeps, Nostradamus visits and tells her that she must find and destroy this evil presence to save the world. 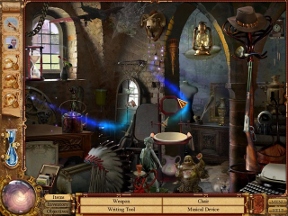 You'll spend the majority of your time looking for hidden objects. At the bottom of the screen is a list of the objects that you're trying to find; at first it'll just be a simple list, but as you progress you'll have to decipher riddles and outlines of the objects you need instead. Then, all you have to do is find them within the room and click them with your mouse.

Like with any hidden object game, this sounds simple but it can end up being quite challenging. While typically the objects are in places you'd expect, sometimes they're in improbably (and sometimes physically impossible) places. You'll get stuck more than once, especially with the picture clues in the late game that are often reversed or upside down compared to the object you're looking for.

Fortunately, Cassandra's a fortune-teller, and you have the option of casting spells to show you where objects are. She knows five spells, with increasingly specific hints, and require an increasing amount of power as well. You start each level with a full hint meter, but if you click randomly or cast hint spells, it can quickly shrink. To refill it, either wait or find more objects. It's a system that's elegant in its simplicity, and keeps you from getting frustrated or stuck.

It's a system that you'll appreciate, especially when you enter one of the game's many minigames. In the course of her adventure, Cassandra will find clues that she must reassemble or puzzles she must solve in order to progress the plot. For the most part, these minigames are a fun diversion, introducing a jigsaw puzzle or some light Wheel of Fortune-style decoding into what would otherwise be a pretty bland game. It's nice to have variety. However, sometimes the puzzles might prove too challenging for you, or maybe you're just not in the mood. In that case, there's a convenient 'skip puzzle' option, which activates after a set amount of time fiddling with the puzzle. When you just can't see the solution, it's nice to be able to just move on with the game. 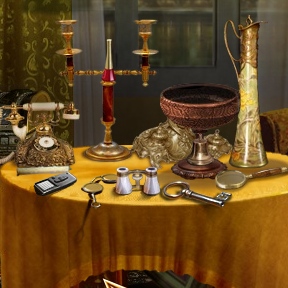 Analysis: Cassandra's Journey 2: The Fifth Sun of Nostradamus is a surprisingly pretty game. Every scenario is well-done, and the quality of the art is so high that I found myself wondering if the characters and settings were photographs retouched to look painted, or if they were just excellently-done paintings. Every object is gorgeously rendered, and unlike other hidden object games I've played, I always knew what I was looking at.

The story, however, is sadly lacking. Although Cassandra's Journey 2 is just a hidden object game, and is just as fun to play without the story, so much effort is put into the gorgeous plot sequences that take place between levels that it seems a shame that they make so little sense. Without spoiling anything, part of the plot revolves around Cassandra's divination to tell the two where to go next, but it's accomplished with ordinary playing cards and a form of Solitaire. Cassandra explains that the last four cards left on the table are "numbers that fate has chosen," but I had a hard time suspending my disbelief when they immediately went to an address which included a K and an A. Still, no matter how you feel about fortune-telling and clairvoyance, the core gameplay is entertaining.

Overall, Cassandra's Journey is a gorgeously presented hidden-object game with solid core gameplay. If you ever enjoyed I Spy as a kid, you'll love this game.

At Cassandra's and Michael's

At Cassandra's and Michael's