Hearth... who? What? It's always refreshing when a third-party developer finds inspiration in a successful idea and innovates with their own take on it. Suppose for instance that you enjoy a current title, but you don't particularly enjoy long loading times (what's wrong with you, anyway?) or don't particularly need an onslaught of retina-scorching special visual effects to get the most out of a collectible card-based strategy game. Or you occasionally feel the yen to play a game but don't happen to be permanently strapped to the internet 24/7. Or for some players you're playing on a midgrade smartphone because you... left your Quantum Tunnelling Nanotech Supercomputer phone in your other pants. Y- Yeah, that's it. Running Pillow brings on Cardstone, their streamlined version of a wildly-successful game mechanic for the rest of us. Choose from character classes like Warrior, Mage, Paladin and Assassin each with their own special abilities and weaknesses, clear floor after floor of monsters and get the option after each battle to swap a card in your per-game deck out with one that you like better. Use the cards available to build and improve a deck that succeeds with a strategy that works, be it plenty of Heals, a strong attack, or mana boosts and plenty of hardcore spells. Each gold to level your hero classes and permanently unlock new and better cards to make them become available in between combat rounds to add to your per-game deck! 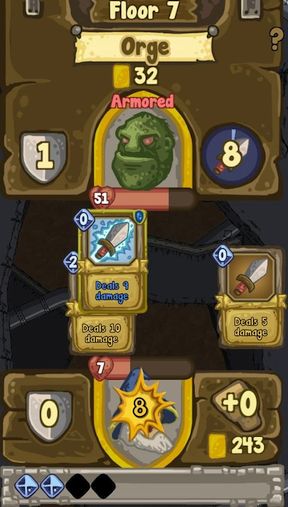 During combat, cards from your deck will be automatically chosen to waft across your screen like sushi boats. Some you can always use immediately, while others require a certain amount of mana for which you may have to wait for your mana to replenish, or even use cards to raise your mana limit. There'll be one creature per floor, which also have their own unique special abilities, stats and attack rate. When you've gone through all the cards in your deck it will be automatically reshuffled and resume passing cards your way anew, making apparent one-shots like potions especially effective picks. Gaining gold through play you can level from the opening menu, and creatures of lower level than you will tend to just flee rather than battle. That means you get to proceed directly to picking card after card, building up your per-game deck before you encounter particularly daunting foes. Cardstone is free and does include optional in-app purchases which don't affect the game, but they appear to be curbing their once-intense verve for throwing ads, purchases and timers displayed by some of their previous titles. Duels require Food, which is on a timer that maxes out at five, but typically duels take long enough that it's not a problem. There are little extras like Daily Rewards for logging in and Quest Rewards for daily achievement, which are nicities, but the gameplay mechanic's the big draw here regardless. Cardstone does like to lob the occasional 'play our other title!' ad at you when you start playing, but that's about it. While there's a Mute button, it doesn't currently allow you to selectively hush the music and keep the sound effects while you play your own tunes as we'd hope. And we'd ideally like to see purchasable in-game deck size expansions, as the per-game decks start feeling a little cramped once you've unlocked enough of the ultra-spiffy cards. Still, Cardstone is one we just keep coming back to for the gameplay value when we're craving just the right amount of casual card dueling action where play-to-win, rather than pay-to-win, still rules the day.