Blue Manchu's card battling RPG board game Card Hunter is one of those games that makes me whine, "But I had things I was supposed to do today!" without a trace of genuine regret and is worth every second of its extremely short registration process. Besides, when Felicia Day speaks, I obey. How can you not enjoy a tabletop-themed turn-based strategy game with Cheese Puffs and soda right alongside the action? Play the extensive single-player campaign with your noble DM Gary, or go up against other players in multiplayer to earn more loot. It's beautifully made, fun, and strategic... if only it weren't for those pesky free-to-play problems... 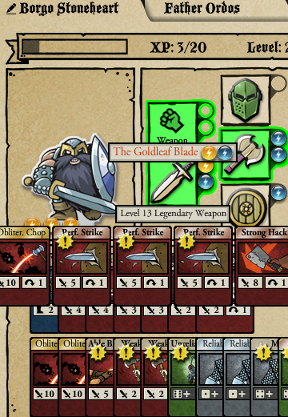 The basics are pretty simple. You and your opponent each have a party of characters and face off on opposite sides of the board. Your characters have hit points, which are self-explanatory, and a set of character-specific cards that represent abilities, spells, and more. You right-click a card to see what it does, and left-click to play it. Each time you play a card is a turn, and then your opponent takes theirs. Once a card is played, it vanishes from that character's inventory, and when both you and your opponent "pass" your turn instead of acting, it begins a new round and distributes cards to characters on all sides. Easy-peasy, right?

Well, easy in concept, yes, in play? Not so much. Card Hunter is all about planning ahead, about taking stock of all the cards you have available in a round and figuring out the best order to play them in. You can't treat it like a regular turn-based RPG because, well, it's not. Even movement costs a turn on its own, and since only one character can take an action per turn, it's extremely easy to paint yourself into a corner if you don't develop a strategy and have your heroes work together. Throw in being able to place cards to trigger on terrain when something moves into that square, terrain that impacts movement and line of sight, different damage types, character classes and races, and you have a game with a remarkable amount of strategic depth. When you win, you're granted treasure you can equip to make your party stronger, and even teach them new card moves.

Once you play through the first two battles to learn the ropes, you'll be able to begin to create your own deck with your own heroes, and that's when things get really interesting. At this point, you'll also gain access to the world map, which opens up new areas to adventure in, and quests to undertake. Most quests can only be done once per real world day, and will reset for you to play again the next. As you play, your party will earn experience points and level up to become stronger, and you'll gain new party members to boot. Better equipment can be bought at the armory, where you can also sell off your unneeded loot. Note that although the game is free, you can pay real money for "pizza slices", which can be exchanged for in-game gold at a rate of one slice for five coins, or buy special chests with rare items. Also for purchase is a membership in the Card Hunter Club (which boosts your loot drops in exchange for supporting with a subscription), and special Treasure Hunt Adventures that will give you an epic quality item for successfully completing them. 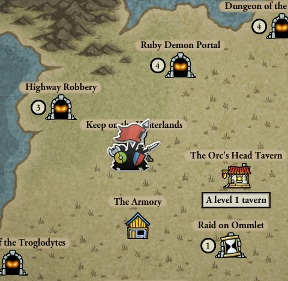 Analysis: If you're a turn-based strategy fan, this really is not the game to sit down to if you have any other priorities in your day. Card Hunter is such a fantastic idea I can't believe someone hasn't thought of it sooner. Mixing satisfyingly complex strategy with the charm and cheek of a fantasy tabletop RPG setting works in an unexpectedly wonderful way. It helps that the presentation is so incredibly polished, with beautiful illustrations and solid writing to take you along, though the audio is a bit of a mixed bag largely because it's so bare bones. (As of this writing, the ambient sound will not turn off even if you lower all the volume sliders under options.)

Having the more extensive tutorial take place after the initial two battles seems a bit strange. I get that showcasing the flashier battles and abilities is good to draw players in, but if you're like me and more interested in the guts of the mechanics, you'll find the "real" game (which is to say, after you're forced to make your own party) vastly more interesting once it starts being explained to you. Traits, map terrain, blocking directions, racial bonuses and more make for an even deeper experience than the opening battles initially suggest. Though it may initially feel like you're at the whims of the game when it comes to the cards your characters are dealt, knowing how to build their individual decks so they're less likely to wind up with, say, an entire hand of useless movement cards for a round is part of the strategy. 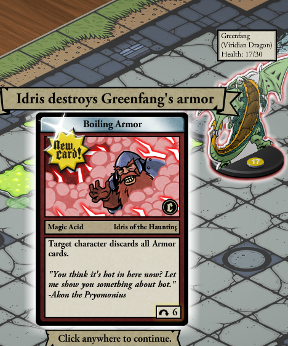 It's unfortunate, then, that Card Hunter's free-to-play model feels like it skews more in favour of those that pay than those that don't. With the ability to straight-up buy chests that are guaranteed better than most anything you'll get, or, heck, even more powerful heroes, it's easy to become a little bitter at the grinding you'll be doing if you don't put out your credit card. You get some pizza during the campaign, but you can't just earn some by playing, and with the "cheapest" microtransaction in their in-game store to buy slices being $10.00USD, players who might otherwise feel inclined to shell out a few bucks to support the site might rightfully balk at the set price. Obviously, you don't need to buy pizza, but, well, the more you play, the more it feels like the grind ramps up to encourage you to do so. When the game shows you what you would have got as loot for paying to join the Card Hunter Club ($10.00USD a month) and chastises you for not doing so? Then it starts getting annoying and downright insulting.

It's not about whether Card Hunter is worth paying for. If it were a paid game, I would have happily plonked down its asking price. I encourage players, whenever possible and they are able, to consider donating to developers and games like this that give them entertainment for free. And if you choose not to pay a penny for Card Hunter, you'll still get entertainment for free, and a lot of it. I just wish its payment model were more unobtrusive then it chose to be, and one that both offered other price tiers and options. In the end, Card Hunter is a gorgeously designed, engagingly strategic game that's well worth checking out and I hope we see even more from in the future, despite its clunky pay model.

I've been playing this in beta since early June (I'm Kalin in game and on the forums).

It looks pay-to-win, but it really isn't. Someone who wins one MP game a day for a month will have a much better collection of items than someone who buys $50 worth of chests. And skill is very important too: one of the AIs you face in MP has ridiculously overpowered cards, but can be easily beaten because she plays stupidly. The items in the starter packs look powerful, but only because they're the first high level items you'll see; they're actually pretty mediocre. I do agree that the payment model is too much in your face.

Your review doesn't mention the Custom Scenario Editor which lets you create your own maps, fill them with monsters and share with your friends. You can even set it up so you're controlling monsters too.

Some notes for newbies:
As you play the campaign, Gary will give you 150 pizza and the Adventurer starter pack for free. Don't attempt multiplayer without a starter pack.

Treasure Hunt rewards can be found in the shop or random chests; I had three of them before I unlocked any of them.

Pay close attention to what the cards say, and hold your mouse over any underlined words for definitions.

The Spark Inductor/Generator cards affect two types of magic in different ways; Sparks are Electric and Zaps are Arcane.

You can right-click items to see thier cards full-size.

This is a collectible game more than RPG; just because a new item seems better than your old one doesn't mean you'll never want the old one in the future. I always keep one of every treasure and as many of the other items as a party can possibly use.

Price to buy items in a shop is based on the item's rarity and the different between its level and yours; you'll get the best price when you're the same level or higher. Amount items sell for is solely based on rarity and whether it's a treasure.

I have to agree with the above post. Also been playing through beta. The game is well designed, balance updates are done intelligently, and it is just pure fun!

I have to agree with the above post. Also been playing through beta. The game is well designed, balance updates are done intelligently, and it is just pure fun!

Wow, this game is the worst thing that could have happened to my productivity - it's addictive. I'm really enjoying the intricate strategy and some of the really tough battles that force me to think deeply about strategy.

Spent my whole weekend on this game. I am hopelessly addicted to it. But like Dora said, I wish the pay model was different.