Available for iOS, PlayTap's turn-based RPG/card game Card Dungeon is a weird little game, but a weird little game I liked a lot for all its quirks. You control a hero moving through a series of randomly generated dungeons, tapping on adjacent squares to move to them and attacking the enemies in your way. In addition to harmless wildlife and not-so-harmless monsters, most dungeons are made up of a mini-boss for the first few floors and a final boss for the last. You can, if you're lucky, find equipment like swords and armor that boost your statistics, but everything is done with cards. The catch is that instead of your standard attack/defend/bravely run away options, all your actions are dependent on whatever three cards you find and equip, and those cards also decay with use until they're completely destroyed. Run out of attack cards and, well, just don't, unless you have a working knowledge of where any traps might be hidden. See, you find cards in containers, which are squares that highlight as yellow nearby and can be anything from actual containers to chairs or puddles of water, and if you reject a card you find in one, it's gone forever. Cards can do anything from teleport or heal you to simply attacking or casting magic spells, and each card has a mana cost, so you'll want to keep an eye on the blue number below your Crusader hero's standee in addition to the red one... your health. Die, and you have to start from the beginning... the very beginning, as in, the very first dungeon. 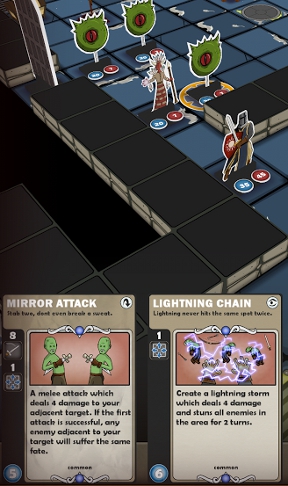 Card Dungeon reminds me a little of Card Hunter, if for no reason other than they're both games with a tabletop aesthetic and slightly similar approach to dungeon crawling. It also claims to have thousands of cards to uncover, which is great, but based on what I've seen it seems likely that most of those are minor variations on one another... the exact same Chain Lightning spell, for example, only dealing four points of damage instead of the standard three. Beneficial, perhaps, but hardly gotta catch 'em all. While Card Dungeon does have flaws, most of them feel like things that could be ironed out. The fact that you can't return and pick up a card you don't want feels needlessly restrictive, zooming out and rotating is fiddly at best and can mean you can't see a character's stats since they don't rotate with the camera, and the turn-based movement, which is already a little slow, gets even slower when you're in a room with multiple creatures. It's also worth stating that the game unfortunately feels a bit buggy at this point, and crashed without warning several times, all of which boils down to a game that feels like it needs a bit of extra tweaking and polish to make it shine.

Despite this, Card Dungeon is still the sort of game that can keep pulling you back. Its simple mechanics mean it's easy to pick up and play, while the variety of cards and their effects (plus your limited capacity for them) force you to think strategically and conservatively as you play. A randomized endless dungeon mode might have been welcome, and even would have taken some of the sting out of the way the game resets all your map progress when you die. The slightly morbid sense of humour is welcome, with things like the Moleshark adding a bit of weird challenge that can even be beneficial if you (ahem) play your cards right. Enemy design is on the whole more quirky than intimidating, and the host of abilities each one has adds variety to battles with more than one foe. Card Dungeon is the sort of game whose slow structure feels best suited for filling small bouts of free time rather than marathon sessions. It's casual in the very best sense of the word, with combat that offers more depth than it initially seems, and is well worth a look for fans of dungeon-crawling with a bit of randomization and strategy sprinkled in, and the complete lack of in-app purchases and ads is just the cherry on top.

And of course it's iOS only. Androids simply don't exist.

I'm trying to remember the name of a game that is a lot like this that was on here at least a year or so ago. But it was online, not on a device. You had the same sort of cardboard cutouts on a tabletop style of play. Does this help anyone think of what it might be?

You're thinking of Card Hunter, which I actually mentioned in the review. ;) https://jayisgames.com/archives/2013/09/card_hunter.php

I'm still ridiculously addicted to Card Hunter...definitely one of the best of 2013 IMO.