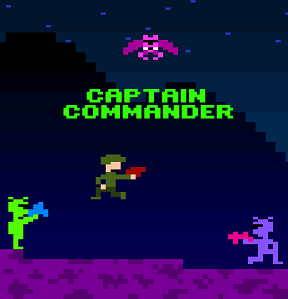 Captain Commander: Defender of the Galaxy! Crash-landed on an alien planet, it's up to him and the trusty blaster at his side, to run, jump, shoot, drive and fly across the landscape, decimating the population and rescuing his comrades from their probe-happy captors. A fine retro run-and-gun action game from Pixeljam and Adult Swim, there'll be much havoc to wreak, and a score of green things to insult before the mission is over.

Though the game features different variations of action, generally the controls remain the same: [WASD] to run, jump and duck, or to steer your vehicle, and the mouse or [numberpad] to fire your weapon. Power-ups will improve your rate of fire or give a boost to your health, and rescuing captives grant you bonus points. Watch out though: some levels feature surveillance cameras, and getting in their line of sight will call forth some furious reinforcements. You and the Captain make it happen!

The folks at Pixeljam are masters of excellent retro-styled games that feel like they should have been, even if they never were. Captain Commander is no different. Gameplay is as simple as "aim at the alien to make them go boom", true, but, as a game, it does simple well. Its variety of levels draws from a host of early arcade inspirations: a driving level straight out of Moon Patrol, interior sections with a Bonanza Bros. feel to them, and a climax that owes a debt to Defender. The quips that the Captain and his foes trade is often chuckle-worthy, and, since it draws from a fairly large pool of text, new banter constantly pops up. The landscapes and creatures have the colorful pallete and imaginative designs that could be exactly what a Spaceman Spiff game for the Atari would look like. One drawback is the implementation of the shooting system: limiting shooting to eight directions is apropos to the retro aesthetic, but detrimental to gameplay. Also, does anyone really like gun-overheating mechanics? Have the words "Boy, I sure enjoy being minced by enemy lasers until a flashing bar arbitrarily decides to let me shoot again!" ever been spoken aloud? Doubtful. Having said this, Captain Commander is a short but sweet blast from the pixelated past, and well worth the nostalgia trip.

Not bad but unfortunately boringly easy, even in Hardcore. (stopped Hc play half though)