Poor, poor Red and Green. They were two adorable, beastly catlike creatures... One might even call them MeowBeasts... with all their lives ahead of them, who turned to a life of crime to support their crippling candy habits. It would almost be tragic, what became of these two Candy Thieves, were it not for one thing: Helping them feed their addiction is just too much fun! This hybrid puzzle game pulls elements from Angry Birds, Bloons, and everything physics: Shoot wads of fluff out of an adorable googly-eyed cannon to push stuff around on the stage, and reunite Red and Green with their matching colors of candy. Use [W] and [S] to move the cannon up and down, and the mouse to aim; you can even make your attacks weaker or stronger by moving the cursor closer to or father from the cannon! And if at all possible, do it in a small number of shots; these guys need their sugar NOW, and they don't want to be kept waiting! The individual aspects of Candy Thieves are all tried-and-true, including the candy theme itself, but the way they're combined leads to something new and exciting. 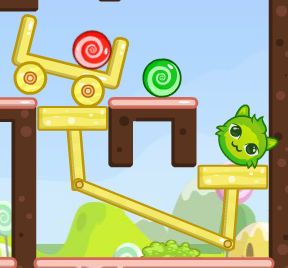 We've all seen games before where you have to get the sweets to the target, but Candy Thieves puts a (peppermint) twist on the idea by removing your ability to interact directly with your environment. Not just because firing out puffballs is a lot of fun (foompf!), but because it adds an additional layer of skill you need to master in order to beat the puzzles. The balls arc and can be fired at different strengths, and the later levels especially do require some precision. The puzzles themselves are also refreshing; the solutions aren't obvious, but neither are they obtuse. They don't require you to do unintuitive things or overly convoluted shots, and the answers have a pleasing simplicity to them. They always "feel" right. Many of the solutions involve transporting the candy or characters through a series of contraptions, and watching whatever it is bobble along is entertaining in the same way watching a Rube Goldberg device is. The physics can occasionally be tricky, but they're generally strong, predictable, and don't feel like a hindrance or something that relies on luck. Candy Thieves is a charming game with a "Goldilocks" difficulty level, and even if you think you've had your fill of candy-themed games, this game's recipe makes it a worthwhile indulgence for physics puzzler fans.