Adorable anthropomorphized candles in danger from evil shadow creatures? It sort of sounds like something you'd expect from Pixar, doesn't it? But the demo for Candlelight, the upcoming platform adventure by Pixel Maverick Games, is all indie. You play the lone surviving candle in a world that's literally going dark as ominous shadows have been snuffing out all the other candles and light sources one by one. This is no time to stand around quivering in your wax, however, as it's up to you to find and relight the candles strewn around the windswept world. Use the [arrow] keys to move, hold [A] to run, use [S] to roll things, and tap the [spacebar] to jump and double-jump. At the top of the screen is your wax meter, which slowly depletes, so you'll need to find and collect wax droplets to keep it fill and your candle alive. Avoid water and gusts of wind, naturally, since it'll tack a big whack out of your wax meter, and if your wax runs out, you'll be booted back to the last camp you activated. 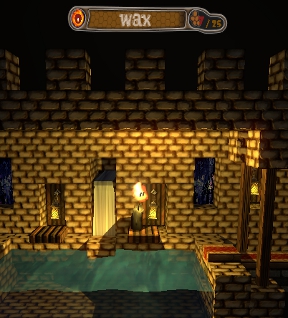 Though still just a demo, Candlelight does a great job of showcasing a taste of what the final product will be like, and packs in just enough new tricks to keep you hooked throughout. Despite its lovely 3D look, Candlelight's gameplay feels very classic in an early console platformer sort of way as you gain new abilities and attacks, and things like the way ice melts around you are a nice touch. The movement is nice and responsive, while the atmosphere is top notch... just the right blend of creepy and whimsy. At the same time, however, while beautiful with its shadows and lighting, Candlelight just feels a little... random. True, the demo is just one level and the full version will likely offer a lot more, but that one level comes across as scattered. Some vaguely Egyptian scenery here, a castle there, and isolated snowstorm... it shows off a lot of tricks, sure, but it doesn't feel cohesive. Likewise, while there are some puzzle and action elements, none of them are really very fleshed out, and more chances to use our candle's abilities to solve obstacles would have really helped captivate the audience. Still, taken purely as a demo, Candlelight shows a ton of promise, and should have classic platforming fans looking forward to the final product when it finally appears.

It was a minor glitch with saving the page. :) The page should load fine now. Sorry for the confusion!

Gorgeous! I Look forward to the final game. I would prefer a double-tap of a direction key for the speed boost opposed to the action key.

Nice game play. Great use off 3D without getting in the way too much. Love the candle lighting effects.

In the unlocked area, I love the balloon. Nice surprise.

On most if not all Unity games, don't forget to right-click for the menu to go full screen.

Cool game, it loaded fine for me, but it worked a little slow at times (I'm using a macbook pro, so not necessarily a high-end computer) You could probably leave out the cutscene at the beginning, it didn't add much for me. I love the metroidvania style gameplay, and I didn't notice the map at first, so I was confused, but then I got through it pretty quickly when I saw the map. Also, you should maybe say that you can double jump, I was stuck because I didn't know. (but maybe I'm dumb)

I reached the lantern in the last "lava" temple before the camp, but you can't reach it because the overhang is in the way.

Yes. :) You need to figure out another way of lighting it.

The hell... I can't even get to the first candle I should light... The space between the last platform and the one with the candle on it is too big, I can't jump over.

Since nobody else has mentioned it, I'm sure I'm doing something wrong - but what?

Aha. You can double jump... Was this mentioned somewhere in the game, or was I supposed to find it out myself?

This was not mentioned in the game, which is why I made sure I mentioned it in the first paragraph above. :)

Very fun level. I'm frustrated near the end, though.

The timing needed to land in a safe spot after the explosive barrels blow up is tough, and I hate having to replay the entire level to try again (four times up to that point so far, no luck)

Ok, major annoyance here. The ol "you take 5 steps after jumping bit" makes it just simply an aggravation and a cheap way to add difficulty. In effect, it halves the safe landing area of any of the platforms.

Of course, you can adapt by pressing the opposite way you're jumping at just the last minute, but inevitably that leads to shorting your jump or landing and running backwards off the platform you just landed on.

Also, I hope the game have mappable keys. Not being able to up arrow for jump is just dumb. Once again, cheap difficulty by making everything except for run be on the left hand.

Now for the good: Beautiful game, great graphics and atmosphere. Apparently a lot of secrets, as I only found 4 idols, so that is good as well.

I figured out a way through after destroying the bridge of explosive barrels.

Above you, there are two destructible blocks with a small gap between them. If you can time a shot just right while jumping, it will slip between the blocks and hit the explosive barrel behind them. When that barrel explodes and destroys the blocks, you'll have a clear path.

Don't worry about ammo. Over to the left, under the stairs, there's a lever you can pull to spawn a +25 ammo pickup as many times as you want.

I didn't even think about going back once I got shoot.
Nor to use it there.

Thanks for helping me find my candle friend!

Shame it doesn't let you go by that.
I'd already found the balloon in my previous game.

Bill,
I think you actually have to do that to get past that area or at least it seems like you are meant to pass that area by doing so.

As Bill says you have to explode the one barrel. It is before the lava that is nigh impossible to jump over, but yes it is possible to jump over it is just not meant to be and you kind of have to get lucky to make it. Instead there is a barrel above you right before the lava pit, you have to shoot just right between the two holey boxes. It is actually kind of easy you can just hold the shoot until it works while jumping.

The lave pit that you can only get to after finding the 5 hidden candles as well as getting to the first of the other five right after the pit (that spot is so slippery and frustrating) The not knowing about the barrel and thinking it was just one of those impossible jumps made me quit that is until I figured out Bill's post, but then I got past that part and found the slippery area just after it and those two frustrating elements (long jump and slipping) really made me not want to play, otherwise the game was great.