The world was being invaded for years by creatures from a far off land. These monstrosities grew in number, but yet the humans turned a blind eye to their existence. So a new hero arose to protect its homeland. This squirrel may be small and adorably fluffy, but this tiny hero packs a punch, or, well, a rocket gun if you pick up the right ammo. Call of Spring is an action platform shooter made by Bit of Game that you play with the keyboard ([WASD] or the [arrow] keys) and the mouse to fire at the incoming enemies. But Call of Spring is a bit different from most shooters as it's not waves that you have to fight against, but fight through to find the exit that lets you advance to the next level to reach your end goal, which is eliminating the Leader of this alien evasion and saving earth, of course. With three bosses and a gaggle of creative enemies, this is a task this small vermin is burdened with since the humans are just too lazy. 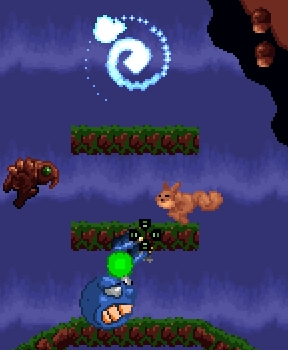 Most shooters feel more like a brawl, being the strength of your weapon that gets you through. But Call of Spring feels more like an adventure. Levels aren't necessarily linear, and you have to hunt a bit to find the spinning lights that mark the end of them. Not all weapons are helpful in every situation, and you have to break open more giant acorns, hoping it drops what ammo you need for the area you're stuck in. The little acorns that the enemies drop upon death grant you some heath, but be careful as one hit from a bad guy causes more damage than is healed by killing him. Thankfully this squirrel apparently ate an acorn magnet at some point as when he get close enough, the little bites of health fly right to him. This is good as when you're jumping around the screen to get higher, or bounce off enemies heads to deal damage, you gain health almost automatically. Just be careful with your leaps in the tree tops. Leaves hide some branches, or more importantly where the branches are not, and gravity is strong. Our little hero has some bounce though, so falling off screen just has him flying back up within seconds with no harm done. This engaging shooter is great for those who are new to the genre and those who find them an old favorite. Heck, even those who aren't crazy about shooters will probably find Call of Spring a delight and half. So go and save the planet. Our lives are in your furry paws.

Challeging as far as controls, but otherwise fairly fun. The power-ups can be used strategically at times, which is nice.