When Earth is attacked by the evil HATE BIT, the Star Nerds gear up for action. Donning futuristic armor and military precision calculators, they protect the planet the only way they know how... the power of mathematics! In Seanbaby's tactical collectible card puzzle game, Calculords, your soldiers are summoned onto the battlefield by performing mathematical operations (addition, subtraction, and multiplication). Tap the numbers and operators at the bottom-right in order to transform a pair of numbers into another value. When your value matches the number on one of your combat units (in the bottom-left), select the number and the unit, and place it in one of the three lanes on top. 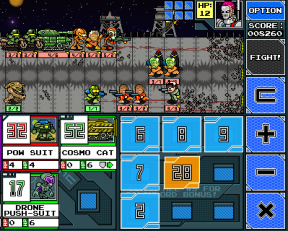 To win a battle, you need to move your units across the battlefield to attack your opponent's base directly. When your units march into your enemy's in the middle of the battleground, your units' attack points will be taken from your opponents' health points, and vice versa when the enemy attacks you. Red units are offensive units which specialize in attacking and doing damage. Green units are push units which are primarily defensive, but can also literally push your line attack forward (pushing enemies back into their base will kill them). Playing a purple card will activate a tactical maneuver that can give perks and abilities to your units or attack your opponent's units or base directly.

Since the numbers on the right disappear after you've used them, you usually won't have enough digits to summon all the units on the left in one shot, but here's where a bit of mathe-tactics can come into play. If you can use all of the digits in summoning at least one card into play, you'll earn a Calculord Bonus and receive an extra hand of digits to math about with. With this, you can often deploy all of your units in one turn, and that's incredibly helpful for defeating your opponent (as well as boosting your score). 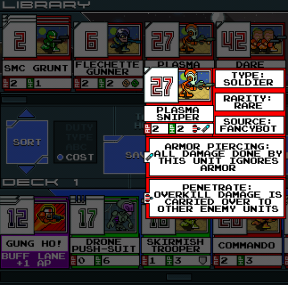 Defeating an enemy gives you two new cards from their deck, which you can add to your playing roster in the deck editor. How you set up your deck can affect how you play, since more powerful cards usually have higher summoning target numbers (like 54 or 72), or have odder numbers that don't multiply easily (17 or 62). If you have too many of these in your deck, you might have hands where you can't deploy all your units because you're spending digits too quickly. Unique packs of cards can also be purchased from the in-game store (and purchasing them lets them be included in defeated enemies' random drops as well).

New enemies are unlocked by reaching certain level rankings; this unfortunately means that you'll eventually have to grind a bit before you can play for new cards. But unlike other strategy games where skirmishes start with tiny units and build into giant tank battles, you can attack with your big 100-point laser on your first turn if you've got the luck and numerical know-how to do it. Even with devastating blows like that available at the turn of a card, the cards still feel balanced to make for an intriguing battle every time. Calculords is a smart and polished game that strikes a beautiful balance between tactical planning and nerdy numericalness.

An Android version of Calculords has been announced; no release date has been revealed yet.