If you're addicted to cutesy tower defense games like Kingdom Rush and Demons vs Fairyland, Leyougames' Calabash Bros will be right up your alley. You control an army of tiny, adorable warriors defending their land from monsters who are invading because... well, as Zefrank would probably tell you, that is how monsters do. In each level, your goal is to keep the enemy forces from reaching the end of the path, since every time they do, you lose hit points. To stop them, you click on the platforms alongside the pathway and place towers with the gold you earn from defeating your foes. Each tower is different, such as the Barracks that spawns soldiers who will attack anything that comes near, and the Magic Tower that can quickly zap enemies from a distance, and each tower can be upgraded during a level for even more power and abilities as well. If you want to help out manually, you can even cast spells on enemy units, such as fireballs and lightning. When you win a level, choose "back" rather than "continue" and visit the upgrades screen from the level map to spend your golden gourds on permanently enhancing your defenses. Looking for a challenge? In addition to your standard difficulty modes, Calabash Bros also allows you to play levels on "random" after winning them once, which chooses and places towers for you... completely at random! 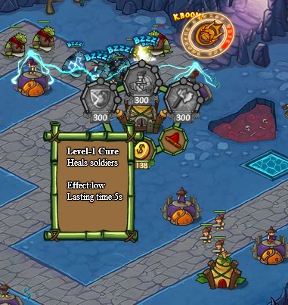 Calabash Bros is one of those games that doesn't really do much the genre hasn't seen before, but stands firmly on solid ground and offers up a beautiful presentation to boot. Towers have a satisfying number of upgrades available that let you adapt your strategy to whatever you're facing, and the interface is clean and easy to use. What's neat is that after upgrading to level three during a level, towers also have spells you can purchase for them. On most difficulty levels, a Magic Tower is almost ridiculously powerful once you've put a few gourd points into them and upgraded them. They hit fast, have a big range, and once you have the skill that allows them to ignore enemy armor, you sort of feel like you should be backlit by lightning, laughing maniacally in slow motion, while Ride of the Valkyries plays as monsters drop like flies. On higher difficulties and later levels, however, you'll need to think more strategically about tower types and placement to deal with increasing enemy power and numbers. Calabash Bros is a solid and satisfying little tower defense game that may feel familiar, but will still offer a nice chunk of addictive gameplay for fans.

The sound effects are way too loud, the game keeps lagging (even on the lowest graphics setting), the music is literally 5-second clips looped, the differences between the tower upgrades are unclear, upgrades are restricted by stage, and at least for the first 8 levels, there's no reason to build anything but magic towers.

Right at level 10, the difficulty curve shoots through the roof. There are so many characters on the screen at once that the game lags intolerably, and despite having as many upgrades as possible, I keep resetting them and still can't beat the level.

And in similar games, going through the bonus stages for each level (in this case the "random" and "elite" stages, as well as different difficulties) gives you more upgrade points. So far as I can tell, in this game it doesn't. So despite being unable to beat level 10 I can't upgrade any further either.

First off, let me say that I didn't experience the lag that others did. The game ran a little slow, but my computer is a little old. No freezing for me.

Fun graphics so I assume the people responsible for this massive waste of time are artists, not coders. Things really do ramp up in difficulty at level 11, but not because it gets hard, (this game is absurdly easy) but because the game breaks. There are upgrades that allow the shock towers to ignore armor, and an in-game upgrade that is supposed to reduce enemy defenses. These obviously don't work. The only thing that can damage the giant lizardy enemies is

tower. Then, in level 12, the game stops letting you upgrade the towers on the lower right of the screen. They will not highlight or select with clicks. The timing on the spells is also WAY off. The cooldown of the soldier power is supposed to be 15 seconds, -%20 for the appropriate upgrade, so 12 seconds. The countdown for the trapping ability of the thor tower is 10 seconds. So I get a little suspicious when the thor tower traps enemies 4 to 5 times between charges of the soldiers.

Please play test these games a little more thoroughly before posting them, I'm not used to finding broken games on JIG. I hope it's not a trend...