Jill may be eight months pregnant, but she's not going to let a little thing like that keep her from her famous mania for cake. She'll just have to do it sitting down. With a movie in town and a ton of hungry people clamoring for her delicious desserts, she'll need to rely on her husband Jack—and you—to make the crowds happy in Cake Mania: Lights, Camera, Action, another fun time management game from Sandlot Games. 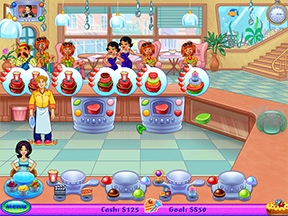 The game follows in same path as Cake Mania: Main Street by having different styles of dash games, all of which are controlled with the mouse. In the main game, you control first Jill and then Jack in the cake shop. Clicking on various stations such as ovens and toppers, you set up chains of activity to supply your customers with their lovingly glucose-frosted creations. You'll also unlock two other shops. Risha's Boutique combines dash mechanics with an almost hidden object flair. The customers thought-bubble what items of clothing they want, and you must find them on the racks and deliver them as quickly as possible. The third shop is Gordo's pizza place, which is similar to the Burger Barn of the Main Street game. Click and drop ingredients into mini-ovens to create pizzas, lasagnas, eggplant dishes, and more. Between levels for all three games, you'll have the opportunity to spend your cash on new and improved machinery, more ingredients, new clothing lines, and more.

If all your customers just lined up patiently and waited their turn, it would be easy (and not much fun). Bakersville is home to some rather interesting characters, however, and they all have their own challenges to keep you on your toes. From the knight, who demands to be served first, to the ninja, who throws smoke bombs onto other customers, to the celebrity whose order causes everyone else to change their minds and order the same thing as her, you'll have to prioritize and strategize on the fly if you don't want to end up dumping your cakes into the waste bin. The most difficult character in my opinion is the "shopaholic", who will steal money left on the counter. In real life, you'd call the police. In this game, you have to grit your teeth and get her cake as if she didn't just cheat you out of $70. 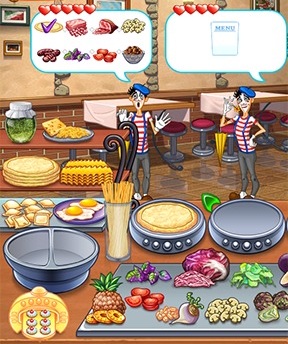 Analysis: With 60 cake levels and 25 levels each of the boutique and restaurant, and with a 4 minute timer per timed level (you can also play in relaxed mode without a timer), that's over seven hours of gameplay if you beat every level the first time, which you probably won't. In a lesser game, a lot of those levels would be filler and game would feel repetitive, but Cake Mania: Lights, Camera, Action! doesn't suffer from that at all.

In the boutique and pizza levels, you're unlocking a new line of clothing or ingredient pretty much every level, and while progress is a little slower in the cake levels, you're almost always upgrading or unlocking something. Every level is also a different mix of customers and challenges. On one level, you'll be swamped with nothing but yetis, who freeze each other. On another, everyone wants star shaped cakes and nothing but star shaped cakes, so keep those ovens hopping. Having three different games to switch between also increases the freshness factor. If you're getting sick of plopping cherries into icing, go take a whirl at the boutique. If you can't stand to hunt for one more sweater-vest, toss some pizzas at the restaurant.

The writing is witty and the story is cute. The movie that is invading the town starts out as Pride and Prejudice, but it quickly becomes something far different, as one might expect by the mimes and axe-wielding dwarves who patronize your shop and the T-rex running around the main map. I particularly loved the running gag over Jack and Jill's inability to agree on a name for their baby. Jill, what's wrong with naming the baby after your grandmother? You don't like the name "Baby Grandma"? You're so picky.

Time management fans won't want to miss this one, and if you're new to the genre, this would be a great game to start with.

10,386 Views
4 Comments
chrpa— Jayisgames really needs your help to continue providing quality content. Click for details Masa's escapes have always been easily recognizable. Their clean and clear graphics haven't changed much during all the years and makes orientation in the rooms, moving...  ...