PixælSoft's free indie visual novel Café Memoria stars a young man named Ryne, who heads out for a bite to eat one day and is surprised to see one of his good friends working there as a waitress. Which one? Well, in the beginning, only nervous and shy Anna, but as you play, you'll unlock more routes with other characters. For romance? Well, possibly, but more than anything, Café Memoria is a lighthearted, sweet and simple slice-of-life game that's a good fit for anyone looking for a visual novel without any drama. To play, just click to select the choice you like when given options. Most of your decisions here are simply choosing what you want from the menu whenever prompted, and then deciding how your waitress did at the end. Like most restaurants, Café Memoria slips you a comment card at the end, and the way you choose to rate your service will leave an impression on your waitress. Though largely linear and not as full of branching choices as it seems, and some spicy profanity from a few characters means it might not be for everyone, Café Memoria is still a cheerful visual novel with a lot of polish that'll bring some sunshine to your day. 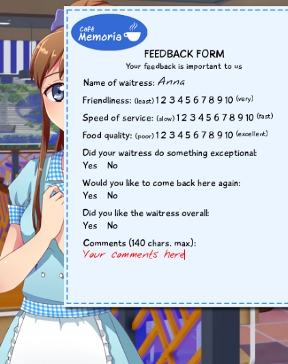 Café Memoria is one of those games that takes a comparatively simple premise and doesn't so much run with it as snuggle up for a cozy afternoon. While the choices you make influence the mood of the waitresses, and even some of their personalities, such as painfully shy Anna developing more confidence, the way the game unlocks each new waitress in order and doesn't really offer any significant plot developments or choice of romance make it a lot more linear than it initially may seem. By focusing on more slice-of-life interactions with the girls than anything else, however, the game avoids feeling one of those "boy meets girls, boy forms harem" type of romantic visual novels, and instead becomes something a lot more people may enjoy. The level of polish is pretty impressive across the board, from the full voice acting to the artwork, and while the characters do tend to embody a lot of familiar anime character tropes, they're all still well written and likable, apart from a few questionable corny lines. (Rhyne, in what universe is telling someone who casually mentiones they have some soda at home that they might get diabetes considered acceptable casual conversation?) If you want something that sets out to make you smile, Café Memoria is worth a visit.

When I try to download the game, says "this is not a file that is routinally downloaded and can be dangerous" or something like that, i'm an spanish speaker user...

too bad, because i really love this type of games...

Hi there! Many anti-virus programs tend to give off false positives for some freeware games. :) I can verify that this is free of all viruses, spyware, and anything other concerning. I would never point you guys towards something dangerous or anywhere at all without testing it myself!

As someone who has a high tolerance for anime cliches...

dang, this game is [i]cliche[/i]. Like, nothing here is new, or even done something old done in an interesting way. I haven't made it past the first route, but man it hasn't caught my interest at all.

All the production values and stuff are well-done (the voicework is actually pretty great!) so I'm going to see if the other characters are more interesting, but man this game does not put on a good first impression.