Made With Monster Love returns from a utopian dimension of ideal geometry to bring you Cadence, a sleek-looking conceptual series of abstract musical puzzles involving resonance, harmony and unity. You'll be provided with a three-dimensional playfield of musical nodes, each of which gives out its own note when pinged by your clicks. Solving a level requires joining them by drawing lines with your mouse, so that the nodes all trigger one another in a recurring melody of notes without a beginning or an end. Some types of nodes will have their own properties, such as cones which will only send a musical pulse to another specific node. If you haven't included a node in your design, feedback resonance builds up within it until the node shatters and you'll have to try again with an improved arrangement. 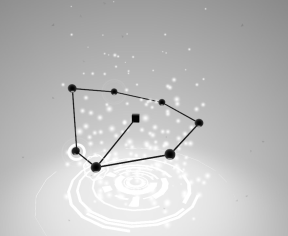 Cadence has solidly grown to surpass the handful of other musical puzzle and strategy games and webtoys over the last few years. While it shares elements in common with Isle of Tune and Nudge Challenge, you'd certainly never mistake it for them. The world first knew Cadence as Synesthesis, a proof-of-concept title for Ludum Dare, and it's been so well-received that it will soon be available for the iPad, PC and Mac as well. By now, it's also up for vote on Steam Greenlight.

Cadence has taken a basic premise with an easily-mastered set of rules, and beautifully demonstrated how elegant and sophisticated patterns can emerge. The French writer Antoine de Saint-Exupery wrote, "Perfection is achieved not when there is nothing left to add, but when there is nothing left to take away", and here Cadence succeeds admirably. A pleasingly 80's futuristic look with refreshingly comfortable New Age feel, and fundamental precepts which have been very effectively crafted into a game that isn't just soothing and enjoyable, but absolutely engaging.

We're glad you're enjoying it, Nathaniel! A level editor is a planned stretch goal for Cadence - along with a sharing feature!

A great game, but being a musician, a few things bugged me; sometimes the notes were out of time, and variations of solutions can produce unpleasant chords. There usually is a very nice sounding solution, but it is possible to create clashy loops.
Only a few minor complaints; awesome game overall, and can't wait to see the end result.

I'm a musician. I assumed I'd really enjoy this game, but I found it utterly boring, I think because the joining of the loops was completely trivial, and seemed like an unnecessary game intrusion into what could have been an interesting webtoy-type instrument.

I'm not a musician, but I LOVED this game. The music was neat, and it gave interesting clarity to the puzzle, but the music didn't feel like the be all end all. It was an aspect. At times, pretty. Sometimes not. Not all solutions are pretty.

I do love me a good puzzle, though.