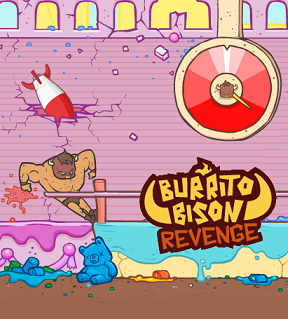 Will those darn Gummi Bears ever learn? When you steal the wallet of the angry minotaur that's already crushed your comrades once before, there will be a reckoning... a sugary, candy-coated reckoning. It's Burrito Bison Revenge, an action launch game from Juicy Beast.

It's a very fun way to past the time, though it does run into the dilemma most games of the launch genre do when attempting a sequel:

how do you innovate when constricted by the expectations of the premise? Juicy Beast does all the right things... refines the gameplay, quickens the pace, adds a number of new enemies, mechanics, and achievements, but it still feels more like "Burrito Bison 1.5" rather than "2". Of course, that's not a bad thing. Like its predecessor, the game is never content to let you sit back and get bored while waiting for the minotaur to lose momentum and hit the ground. There are always body slams to time correctly, cars to hijack and rocket-ships to pilot. This definitely mollifies the repetition of grinding for upgrade cash. Launch after launch, Burrito Bison Revenge keeps the wackiness going and the entertainment flowing.

Looks gorgeous and a nice game, but realistically it's pretty much exactly the same game as Burrito Bison. As such I'm not fussed about working my way through it again. Disappointing.

Agreed. ~100 upgrades? I liked the first one, but I just don't feel compelled to bother with this again.

it needs about 5 million to upgrade everything and skip some impossible quest.horrible.its silly to keep player playing the game in this way.3/5

Some achievements are practically impossible to complete, such as the one that requires that you smash a Lucky Gummy while in cotton candy and in Survival mode (which means you have to max out the Lucky Gummy first, because they don't appear in Survival otherwise.) Over many attempts I smashed them a few times on the rebound, but there's basically no way to get one during the descent.

A good game which I'm currently running unattended in the background so that I can max out the upgrades, although I know it's pointless.

Actually, you can buy achievements (quite cheap, too) when they are too improbable to reach.

My question is: are there any more enemies after the Berzerker?

For those who are playing: how do we beat Cyborg Jawbreaker?

At least a dozen of perfect launches to kill him. I don't know the exact number.

It says "Grab a gummy" what does that mean?

Loved the first one. Love this one, too! I LOLed at the "Pulp Fiction" reference with the wallet in the intro comic strip.

LOL at the lucky gummy nyan cat reference. That alone made the game worth playing XD

Grab a gummy refers to those big pink gummies that you bounce on.

---
So I've maxed all my stats, I've upgraded nearly all the gummies and I just got Berzerker. Has anybody smashed through the concrete wall and if so how did you do it?

@Littleghost
I've broken through the concrete wall, I can't remember how sadly. I think it is in part a bit of luck on the order of gummies you hit.

Actually you just have to hit the door hard enough.

Hit it hard enough? I have no idea how to do that when my speed plummets everytime I smash through the safe wall. I've even timed it so I caught on fire right before the safe and it still went out and did nothing.

how do you even smash through the safe?

Smashing through the safe is a matter of upgrading enough features. But the concrete wall after the safe is ridiculously hard, I've got everything but Police Control and Rocket Slam upgraded to max and it still won't budge. I think I've hit it on maximum achievable speed (on fire and all) a few times now, and nothing. So asdf might be right, maybe it depends on the specific gummies you're supposed to hit just before breaking through the safe wall.

Launch games depend on luck a bit too much for my tastes already so this really isn't helping. It's enough to turn a pretty fun launch game into a frustrating, boring mess.

I broke the wall! :DDD I don't know if this happens for anyone else, but whenever I press B, the game freezes for like 5 seconds and then resumes as normal. So, when I hit a cruiser, I can just keep spam clicking and pressing B to go supersonic speeds lmfao. You can also use an auto-clicker if you want to. Set the click rate extremely high. My speed record so far is ~10,000 km/h and I'm not even half way through the game c; But beware, if you break the concrete wall in the safe, it's impossible to stop. Apparently there's no friction in there so the level will never end and you have to restart -.- But you can still get distance achievements. I had 'To Infinity and Beyond' when all of my powerups were like level 2 xD

I realized that smashing through the vault door causes you to lose a LOT of speed. If you wanna get through the concrete wall at the end, you better be going FAST.

Anyone know what the floating "newspaper" is?

I have what appears to be a rolled-up newspaper with eyes, following me close behind and just above. It appeared suddenly at the end of a run along with a message, something about fuel. It's not clickable and I don't see that it gives any special powers. Nor is there any reference to it in the game or instructions.

@David Churches:
I believe you're referring to the "Fuel Fajita" (though it looks more like a burrito to me) which is one of the three bonus unlockables in the fourth, "Exclusive to Supporters!" section of the in-game store. Click the smiley taco icon to the right of the Burrito Bison, Bubble-Gum-mi, and chocolate-chip-cookie-opponent-whose-name-I-forget icons at the bottom of the store window.

Some achievements are practically impossible to complete, such as the one that requires that you smash a Lucky Gummy while in cotton candy and in Survival mode (which means you have to max out the Lucky Gummy first, because they don't appear in Survival otherwise.) Over many attempts I smashed them a few times on the rebound, but there's basically no way to get one during the descent.

Scarcely impossible; rather, a matter of lucky timing. I actually accomplished this feat two or three times before I was assigned the mission. Spending as much time as possible in cotton-candy form helps, and by the time you get the mission, that shouldn't be very hard.

Possibly you're taking beating the story mode as your goal, and the missions as means of helping you towards that goal in the form of cash bonuses. I'm instead playing with completing all missions as my goal, and only intend to make a serious effort towards smashing through the "End of Candyland" wall after I've done so.

Personally, this is one of my favorite launcher games, despite and/or because of its being so similar to the original Burrito Bison game. All I really require from such games is fun graphics and reasonable balance; for me, the fact that it takes a considerable time investment to beat the game is a feature rather than a bug. My favorite launcher remains Toss the Turtle, but a change of scenery is nice once in a while. Certainly BBR has been great for assuaging my disappointment with Canoniac Launcher 2, which last I checked was literally the lowest-rated game of all time here at JiG.

Now, this advice will probably come too late for some of you, but it helps considerably to

put off upgrading to the next boss for as long as you can, since it becomes harder to get a perfect launch with each successive boss.

All is not sunshine and candy-spatter, however...

I'm hoping I haven't found a glitched unwinnable mission, myself: the one where you have to "Squash a cruiser while holding a chubby [the plump, pink, apparently-made-of-chewing-gum one] gummy!" I successfully made cruisers go splat! when landing near them on a chewing-gummy, but when this didn't register as completing the mission, I figured the trick was to actually land on the cruiser while "holding" (and therefore not bursting) the bubble gummy.

After many, many launches (and with only seven other missions left) I finally landed directly on top of a blue "cruiser" gummy while riding one of the pink gummies... and it still isn't registering.

Has anyone else completed this one? Does it possibly, even though the mission description doesn't say so, need to be completed in story mode?
Can the power of the post save me?