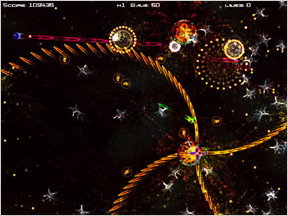 Bullet Candy is a frenetically paced shmupper's shmup ("shooter" to the casual folks out there), a purified genre piece that thrills in its simplicity—you can download a fairly meaty demo for Windows and Mac OS X.

Moving your ship around a single screen fighting space, and aiming with the mouse, you control a blistering battle with all the grace of a figure skater armed with an AK assault rifle. The simplicity of the controls is inviting even to those uninitiated to the top-down shooter genre, and pretty soon you'll find yourself dancing through bullets and careening to a x10 score multiplier.

Created by a one-man development team, Bullet Candy is a highly polished example of "scratchware", a quality game produced on a scratch budget. The man is selling his creation for ten dollars, which is a real bargain considering the number of modes and replay value in the game. Asteriods mode is like the arcade classic amped on crystal meth, surviving even two minutes in there is an intense, heart-pounding achievement. Survival mode is more, well, survivable, but becomes similarly heated. An international high scores table invites players to strive for greatness, extending the replay value considerably and driving the truly hardcore to train like Rocky Balboa in front of the computer screen. The only real flaw is that the controls, as elegant as they are, could be further improved: the mouse targeting adjusts only on a rotational axis, the distance of the cursor from the ship is immaterial. If the targeting cursor was constrained to the immediate rotation of the ship it'd be easier to aim in a clinch, instead of having to drag your targeting cursor all the way across the screen.

Bullet Candy's controls might qualify it to be a "casual" shoot-em'-up, but its not for everyone. Those who can sip their own adrenaline like a twelve year old Pinot wine should definitely consider giving it a try. For fans of the genre, Bullet Candy is a game you can come back to years later.

Very slick! love the movement and the graphics. The action gets really crazy really fast, too... managed to beat arcade mode and survived for as long as the demo let me on normal difficulty, but it was tough...

And actually, I think the controls are fine the way they are - locking the mouse into a circle around the ship would annoy me, I think. Of course, to each his own...

One thing I would suggest though is support for more resolutions (higher, and widescreen). This game is too pretty to be limited to 1024*768.

"If the targeting cursor was constrained to the immediate rotation of the ship it'd be easier to aim in a clinch, instead of having to drag your targeting cursor all the way across the screen." - Patrick

But if it was confined to the circle, aiming would actually be way more sensitive then it should. Mouse-location aiming allows you to be accurate with your shots (since you know where your bullets are meant to be), but it's also meant for fast acting. If you want to play this game the way you describe, it's meant more for dual-analog controllers (such as Geometry Wars or GridWar). I've always been a fan of dual-joy shmups such as Smash TV, Total Carnage, Geometry Wars, GridWars, Robotron, and any other clone I can name. Controls all depend on what you play with.

I love the game, played it for far to long, but it was too laggy to play much longer on Intel Mac... Sheesh. But this game ranks up there with GridWars for me, that kinda game. Great thing to come back to again and again. I just hope they port to Intel.

Thanks for the plug guys :D

To answer a couple of questions:

An Intel Mac build is on the way with the next update. For now try turning the feedback off from the pause or options menu, that should give you a little boost in speed.

@Deadl0ck, your machine way out-specs mine, perhaps you need to troubleshoot?

What else do you need to run this thing? I download it, open bullet candy, I select full screen or windowed, and a window appears for half a second, and then dissappears. Nothing happens. Did anybody get this problem?

Uhm, I doubt it's my machine, since it runs mainstream games wonderfully, I can run warcraft, halflife 2, dark messiah, Battlefield 2142, Meverwinter nights 2, Just Cause, all without graphical issues or low framerate.

So yeah, don't go telling me I need to troubleshoot, when my system runs like a dream. :P

Also, on a side note, I find it quite annoying that the game "Remembers" clicks. I.E. I click my mouse, in the menu, without bieng on a menu item, then move my mouse along the menu, and the first item I pass, it selects. This happens up to a delay of 10, 15 or so seconds.

Visually appealing and lots of action, but the levels lasted a bit too short for my taste, and I don't think their 'flow' is ideal: they're hard (too sudden?) at the start, and easier at the end, since by that time you've shot down most enemies. Haven't played survival mode yet, though.

Also, the visuals worked distracting: I often lost track of my mouse pointer in all the bright explosions and fireworks. Resulting in poor aiming and often death.

Not my style of game, but damn it sure is perty. :o) Good job!

Loved it, reminded me of Tempest 2000. And excellent music; if you made the songs yourself, good job.

Pieter - if you turn off 'shrapnel' and 'feedback' in the options menu, it reduces the visual clutter quite a bit; I ended up doing that myself, for much the same reasons.
But yeah, I agree with you about the level structure...

Classic arcade games rock! Especially when mixed with crystal meth and acid. The game a high paced, interactive display of fireworks. I bought the game ten minutes after buying it.

With that said, I do have some feedback for the next edition.

In Asteroid edition, I die 95% of the time rocks I can't see. The bright colors of the bullets shrapnel completely mask the rocks. I like this mode cuz the targets can take hits and they bounce odd each other but I hate this mode cuz I always die from rocks I don't see coming.

In survival mode waves of attackers always come in the shape of a rectangle from the perimeter. Give us some some other formations of attack, create some waves of circle and triangle or something.

The intensity of the arcade mode starts hard and soft. Instead, I would like to see you stager the introduction of villains and save the best for last, create a climax for the stage.

Last on my train of thought are the controls. If you were to restrain the targeting to the immediate rotation of the ship you would have gone too far. I like being able to target the far right hand corner the screen while I dodge a few enemies around me. I think a better idea would be to limit the distance of the cross hairs, maybe to 1/3 or 1/2 of the screen away from the ship.

I'm looking forward to the next edition.

Bullet Candy is (legally) being given away today only at http://game.giveawayoftheday.com/ !!!

I would like to let the staff here know that the link is broken, otherwise I would really like to play this. Thanks

[Edit: We checked the link and they appear to be fine. Perhaps it was just a temporary issue? -Jay]