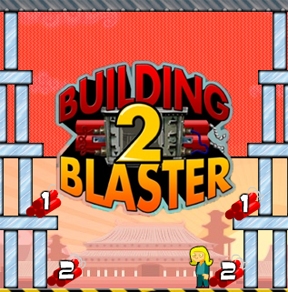 The fun thing about video games is that they let us simulate actions that we would otherwise be unable to experience. Building Blaster 2 is a physics puzzle game from 2DPlay that lets you enjoy all the fun of blowing up buildings, with none of the risk of blowing up yourself. Plus, real demolitionists seldom get to use aliens in their line of work. Gamers 1, Demolitionists 0.

The game is divided into 50 levels; each will present you with a building, or set of buildings, and it's your job to transform them from buildings into piles of former buildings. To do this, you are given 20 blast points, which can be distributed through a variety of tools. TNT is the only explosive that is immediately usable, but bigger and better bombs can be unlocked as you progress, each with their own function and cost in blast points. Simply place the bombs with the mouse, adjust their timers, and push the red button, then sit back and watch the destruction unfold. The ultimate goal is to get everything below the red box, but there are bonus points to be had for hitting your rival in demolition, and penalties if you should happen to harm any innocent bystanders. The points are converted to cash at the end of the level, which is used to save up for new ways to make things go boom.

There's also a level editor, for those of you who are more into construction than destruction. All of the features that you see in the pre-made levels can be utilized in creating your own building, which can then be shared with your friends and neighbors. The same weapons you've already unlocked will still apply in user levels, so it would be beneficial to complete the game before you start playing with user-made content. 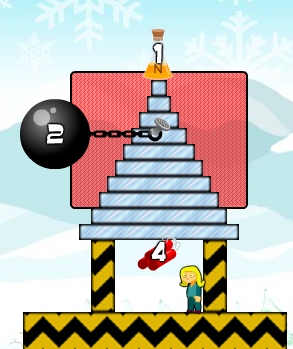 Analysis: Explosive deconstruction isn't anything we haven't seen before, but Building Blasters 2 brings new layers of depth to the genre. With a variety of tools at your disposal, and no restrictions as to where they can be placed, the possibilities for completing each level are endless. It's nice to be able to set a timer to create chain reactions, and the different types of blocks with varying degrees of fragility provide ample opportunity to change your strategy as you go. Also worth noting are the physics, which are surprisingly sound for a game involving explosives. That is to say, detonating explosives in the same layout multiple times will consistently produce the same result, so the number of surprises are kept to a minimum. The graphics are nicely done, with the cartoon-y effects working in the game's favor, and the explosions are suitably satisfying, especially once you start using better tools. There's something inexplicably satisfying about knocking down a rival demolitionist with a well-aimed girder.

There are a few minor problems that keep the game from being perfect. It's possible to initially place an explosive partially off-screen, but if you ever try to move it, it'll immediately snap completely into the play area, and you'll never be able to get it quite back to where you had it. Also, some of the level designs focus entirely on either saving civilians or attacking your rival, so these can be easily completed if you're not after points and don't mind a few casualties. But these imperfections are minor quibbles, and easily overlooked when you really get into the thrill of trying to cause maximum damage with minimum explosives. Or maximum damage with maximum explosives, if you're feeling particularly destructive. Either way, you're sure to have lots of fun!

Explosives not really destroying things is a big problem. All it does is push objects around, not actually destroy stuff that is specifically labeled as wood or glass. More annoying than fun.

I thing the game is neat. But at times I don't get that despite knocking everything down, it still says demolition error lol.

I'm on the last mission, Mission 50. It is impossible!

Guest, on the last level, hint:

If you do things just right, none of the top blocks will fall into the pit

You can actually complete this level with just one device

First time caller. Here's a level I made. Not hard, more of a critical thinking exercise.

As great JIG fans we at 2dplay are excited to get our game reviewed here. Thank you guys so much!

We have also just announced a great level design competition. Everybody is welcome to send their levels and get credited as well as stand a chance to win prizes.
You can check our site for details or just start making levels and sending them at leveldesigner[at]2dplay[dot]com

to JIGuest: just checked out your level. Plays great! Do you want to participate the competition? If the answer is "yes", please send it to the email address above.

i cant pass level 46 its impossible

@Sylocat - 41 is tricky to clear without killing the innocent guy. Here's what worked for me:

@megax - Here's how I cleared 46. Sorry it's somewhat vague:

how do you do mission 42

I'm Stuck on level 48. Can anybody tell me what they did to get past it?

I finished the game in 3hours!!HAHA the last 5 levels are highly strategic one!