Who knew that real estate development could be so entertaining? It must be so, otherwise we wouldn't be celebrating the release of yet another time management game that involves building, renting, and demolishing houses. Well, sort of houses, the kind you hear about in bedtime stories or Disney movies. The Build-a-Lot empire just keeps rolling along, doesn't it, even in imaginary lands. Brace yourself for more construction fun with Hipsoft's seventh entry into the series, Build-a-Lot: Fairy Tales. 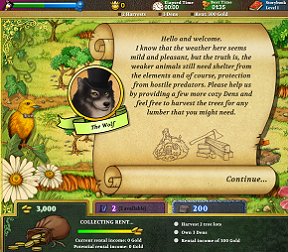 The basics of the build-a-lot series are simple: you begin with a location that is in need of development. The local mayor (whether that mayor be human or a big, bad wolf) lets you know what needs to be done, i.e. they need cottages. You then manage resources (building materials), workforce (construction fairies!), and time to get the needed construction done before the clock runs out. Houses you build bring in rent or can be sold outright, and the money can be spent for more materials or labor in order to get the job done. Each scenario has its own unique requirements and there are a lot of scenarios to work through with five main sections: a tutorial, the storybook levels, the expert levels, the quickplay levels, and the casual levels.

Rather than being grounded in basic construction as all the rest of the Build-a-lot games have been, Build-a-lot: Fairy Tales is, well, set inside the world of fairytales. The mayors of each location come right out of children's stories such as the big bad wolf, the nutcracker, the frog prince, etc. The residences to be constructed are equally fantastic, featuring dens, gingerbread houses, fantasy manors and the like. Buildings to help alleviate materials or labor costs are also available, a dwarves foundry to help lower the cost of building materials, and a toadstool to incite the fairies to work faster for lower wages. Town improvements such as wishing wells show up to enhance real estate value and appeal. 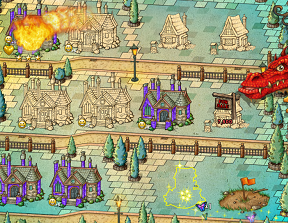 Analysis: Yes, Build-a-Lot: Fairy Tales is basically Build-a-Lot: On Vacation (the sixth in the series) with a fairy-tale skin, but what a fantastical skin it is. Unlike Build-a-Lot: Elizabethan Era, which was the Build-a-lot standard with slightly different visuals, this world takes the basic time management of the series and elevates it to a new level with actual storylines and the delightful graphics, characters, and animations.

HipSoft has jettisoned the now somewhat stale backgrounds of basic grass, trees, and streets, and created a cornucopia of visual delights, from the meadows to the mountains, from the fantasy town of the nutcracker to the deep forest. Each area has amusing supporting characters gracing the sides of the screen, along with incidental sounds that perfectly match the location (love the bleating goats and sheep of the mountains). Each of the mayors has been given true personality as well (why precisely is the big bad wolf fixing up the meadows? why does the nutcracker want to escape the town so badly?) making the experience richer and more satisfying. Simple things like the construction workers, represented by hard hats in the rest of the series, have been upgraded to beautiful butterfly-fairies. Even the now standard build-a-lot music has been upgraded, meaning that everywhere in the game is a feast for the eyes and ears. Best yet, houses no longer just fall into disrepair. No, a flipping FIRE BREATHING DRAGON appears and torches your property instead, one of many delights to be found as play continues. 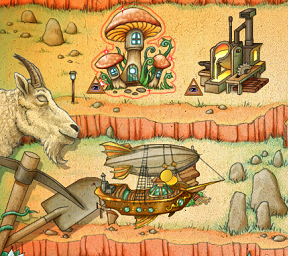 The gameplay is completely in line with Build-a-lot: On Vacation, with the wooded lots, the ability to "enchant" (i.e. stage) the homes, and the like. For those who loved the sixth in the series here are a multitude of new levels of gameplay. The enchanting graphics and storyline are tailor-made to help introduce the younger set to the series, all the while maintaining the high levels of gameplay we've come to expect from HipSoft's flagship series. There's even more of a story through line as you go from one area to the next, with call-backs to previous mayors (for instance the delightful flying ship you built for the nutcracker has a habit of flying through later scenes).

For those who have been complaining that the series never seems to update their backgrounds, well, here you go. With the intricate and challenging gameplay, fantastical backgrounds, and most importantly an actual story Build-a-lot: Fairy Tales may be the best of the bunch, rather than a stale re-skinning of something we've seen before. For those who love the series and those who've never tried it, here's an imaginative gift from HipSoft wrapped in bright shiny paper and an elaborate bow.

Requirements: Own 3 mansions on coveted lots, Own 1 Foundry, Rental income of 2,500 gold, Create a flying machine.

Requirements: Own 1 witches cauldron, Own 3 enchanted houses, Own 3 painted gingerbreads, Town charm of +50.

Requirements: No Gingerbreads in the town (6 more remaining), Own 4 Manors, Own 4 Tree Houses, Town Charm of +100.

Requirements: Own 1 Magical Harp, Own 3 Gingerbreads, Own 1 Witches Cauldron, Town Charm of +150. Late Requirement: No Dens.

Requirements: Own 1 Witches Cauldron on a coveted lot, Gild 5 Towers, Own 4 Tree Lots, No empty lots in the town (2 more needed). Late Requirement: Own 3 Tree Houses upgraded with 3 stars.

Requirements: Own 3 mansions on coveted lots, Own 1 Foundry, Rental income of 2,500 gold, Create a flying machine.

Requirements: Own 1 witches cauldron, Own 3 enchanted houses, Own 3 painted gingerbreads, Town charm of +50.

Requirements: No Gingerbreads in the town (6 more remaining), Own 4 Manors, Own 4 Tree Houses, Town Charm of +100.

Requirements: Own 1 Magical Harp, Own 3 Gingerbreads, Own 1 Witches Cauldron, Town Charm of +150. Late Requirement: No Dens.

Requirements: Own 1 Witches Cauldron on a coveted lot, Gild 5 Towers, Own 4 Tree Lots, No empty lots in the town (2 more needed). Late Requirement: Own 3 Tree Houses upgraded with 3 stars.