Welcome to Witch Country! Don't worry, it isn't as scary as it sounds. Instead of mixing potions or getting put on trial for sneezing, you'll simply be matching like-colored bubbles. Bubble Witch Saga 2 is a marble popper from King similar to Puzzle Bobble (a.k.a. Bust-a-Move), but with a surprisingly well-assembled presentation and gameplay that feels as smooth and natural as popping bubbles in real life. 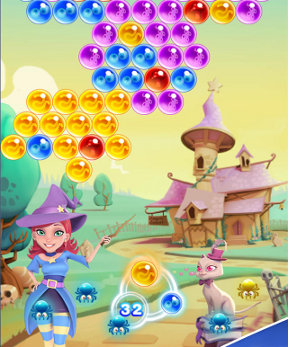 The top of the screen is filled with colored bubbles. At the bottom is the bubble cannon, which you can fire simply by dragging your finger left or right. As soon as you let go, the loaded bubble fires, ricocheting off walls and coming to rest when it hits another bubble. Hopefully your aim was true and your shot created a match. If not, there's always the next two dozen shots!

Each level has a goal to complete, which is usually something simple like clearing the top or saving a few animals trapped in bubble clusters. Some stages scroll upwards once you pop lower sets of bubbles. Others have floating clumps of bubbles that pivot when shot, allowing you to move things around to set up the perfect screen-clearing match. Careful, though, as there's a shot limit in place on most stages, so you can't go too crazy with the popping.

We've learned over the years that the key to mastering marble popping games is to cut strings of bubbles off at the root, causing them to fall. In Bubble Witch Saga 2, those falling bubbles don't simply disappear, they bounce around the bottom of the screen, smacking into spider bumpers and eventually falling into cauldrons to score you some bonus points. It's kind of like Peggle, actually, and keeping the base well-stocked with spiders is an easy way to make sure you get a good score. 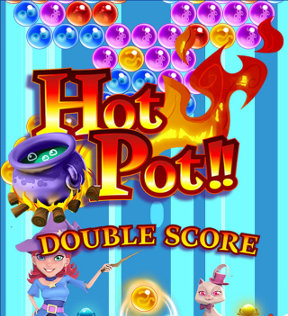 Analysis: It's easy to write off games made by King with the word "candy" or "saga" in the title as cheap cash-ins designed to push microtransactions in everybody's face. While Bubble Witch Saga 2 does have an in-app purchasing system, it's comfortably tucked into the background. At least, it is during the first few dozen levels. The IAPs start to show through after level 25 or so, making things like buying extra bubbles and power-ups a bit of a hassle. The energy system also seems to buckle down at around this point, forcing you to take breaks while it recharges. It's not nearly as unreasonable as, say, Plants vs. Zombies 2, but it's noticeable.

The only other fault in Bubble Witch Saga 2 is related to the scoring system. Maximizing your points boils down to bubbles hitting as many spiders as possible before falling into the cauldrons. Spiders are frightened away when you take a shot that doesn't create a match, which is sometimes unavoidable given that the bubbles in the cannon aren't always what you need. Getting tons of points is one part skill but three parts luck, which isn't quite perfect when you're out for a three-star score.

Despite the slight IAP stumble, Bubble Witch Saga 2 is a shockingly good game. It looks fantastic, hitting a nice balance between friendly and "far too cute for its own good", and it's remarkably easy to get addicted to. The combination of a simple marble popper with the pachinko-style scoring system keeps you wanting more.

Literally just a pay to win version of bubble bobble. Following King's usual MO, the first few levels will be winnable through skill alone. The later levels will literally require luck to complete, and the player will be forced to shell out huge amounts of money to maintain his or her dignity....