Man the cannons and warm up those fingers, because Bubble Shooter Archibald the Pirate has been released! It's a match-3 marble popper game from Akkad and Avox Games with a unique physics twist. Archibald needs you to help fire the colorblind friendly marbles to clear the screen before you run out of ammo. If you notice Archibald looks a little familiar, then you've probably played the hit game also from Avox, Frozen Candy. While a lot of things are similar, with some levels having the balls frozen into place until the temperature rises, Bubble Shooter Archibald the Pirate has new surprises of its own. Special cannonballs you can buy to help when you're in a tight spot, plenty of levels each with their own challenge, and probably the best, a mobile version, both iOS and Android compatible so you can enjoy even on the go. Oh and it's all free, with no impossible levels that make you pull out your wallet to beat. and ads that are rare enough and so non-intrusive you'll forget the game even has them. Throw in the beautiful backgrounds and an adorable pirate with his own personality and you've got yourself one fantastic game. 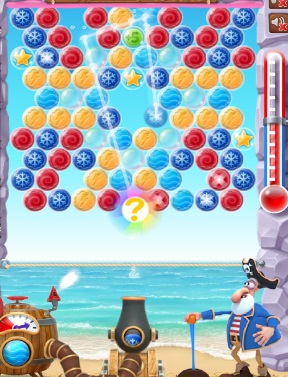 Taping or clicking on the screen shoots the cannonball with all the power it has in the place you tapped. When three or more touch. the balls will pop off the screen, in standard marble shooting form. But things are happening in real time, with the ceiling lowering itself and, on certain levels, the temperature rising to melt frozen bubbles and sending them bouncing freely. Sometimes this is in your favor, because if three matching bubbles touch, even without your help, they'll remove themselves. In some cases, however, they swoop below the rope line of doom and your game is over. It's a tricky play of waiting for things to settle or firing fast enough so they can't. You have a limited number of marbles so you have to plan your shots carefully, but the order of color doesn't change when you restart. There are special marbles that grant you five more shots but there are more sinister marbles awaiting, like rock ones can't be moved until you disconnect them from the screen, bubbles that hold marbles together and slow down your power with each one you pop, and wooden wheels that cause the marbles attached to spin and rotate as you disrupt the weight on it. Along with these insidious marbles, there are three bubbles on each level with stars. You must pop these and not let them fall off screen to collect them, which is important since they not only contain coin multipliers, but are needed to unlock more levels.

Bubble Shooter Archibald the Pirate is a marvelous marble shooter that really brings something new to its genre. Its light and bubbly music and the bright fun colors just lift your spirits. Archibald's part in the gameplay isn't too big, but he'll give you a heads up when you're half way through your shots, and he'll also cheer for you when you get a star and does a face palm when you lose one. He helps you figure out what is going on without you having to break concentration from the game at hand. The only thing he doesn't help with is switching the marbles around in your cannon. Though you can see the next one that is to come off in the corner there is nothing you can do to swap your current one with it, which is usually a staple in these games. But with how the levels are set up, it is more of a puzzle to figure out how to use the line up you've been given. Sometimes it's best to use a shot not to match any colors, but to stick a column up higher so it won't hit the end line or even use it to try to push three other colors together. Occasionally when you make a match they won't burst, and usually this is because they are a smidgen too far apart to count as 'touching', but if you wait a bit for everything to settle they connect and they'll all pop off screen. The physics really make this game different and come with a different set of thinking making it a fabulous game for those who are a fan of marble shooters and a good one for those who have never tried this style of puzzlers to check out.

Very much like the game I played about 20 years ago on Kelloggs. The bubbles drooping to the bottom like real bubbles do, the bubbles going in between each other without getting stuck on the outer edge. This has the improvement of power ups, stars to collect and money earned to spend in game instead of just points as a high score. Not having to play it over dial-up is a huge benefit.