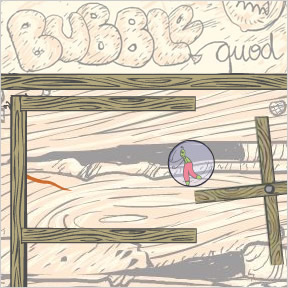 Quod. \ˈkwäd\. British slang for prison. Very few games teach you new vocabulary words while entertaining you, but BubbleQuod, a physics-based puzzle-platformer from Ukrainian developer Garbuz Games, manages to do both quite ably.

To free yourself from your self-constructed prison to keep out the dangers of the world, you must roll across fifty stages and seek the bubble-bursting pin. The developers offer two levels of difficulty: "normal," which allows for in-air control, and "hard," which is more realistic.

Physics games are inherently tied to the success of their physics engine, and here BubbleQuod mostly passes. The bubble can be finicky at first, but after a few levels the controls become second nature. The objects with which to interact are varied, and introduced with enough frequency to stave off boredom until the difficulty curve takes over. (Said curve may be a bit unbalanced: difficulty increases quickly around level 20, and the last few levels may cause stress-induced baldness.)

The graphics are beautiful, with backgrounds evoking an inventor's workbook, scribbled with notations and designs. The music loop may get repetitive after a few levels, but a mute button is close at hand.

There are ten languages available, ranging from English and Spanish to Russian and Portuguese, but dialogue is kept to a minimum. It's just as well; this is a game that holds its own in any language.

I love all these new physics games!

So far this one is a blast.

Lovely new game, but how frustrating! Am already stuck on level 9 and only have 25 points!

My dictionary confirms this, but I've never, ever, heard anyone use it - very old fashioned I think.

I am sure you had already worked that out by now ...

thanks accro... yep got it

The difference in controls between normal and hard are too great. On normal, there is nothing keeping you from just jumping to your goal and avoiding the obstacles all together. On hard, you struggle with the basics of just using your momentum to move you left or right.

There needs to be an in between that at least encourages you to use the level to get to your goal, regardless of difficulty. Overall, the I like the art, but until the controls are tweaked, it's just another entry in a long line of physics games.

have been stuck on level 49 hard for ages now - determined to crack it... so many close but no cigar moments ...... grrrrrrrrr

@accro
I'm sure, you have passed the level; but for others who have stuck:
level 49

Thanks guladhad, I ended up doing it the more complicated way ..... ended up after level 50 only with 69 points though. Somehow felt cheated that no points were awarded for sheer perseverance! Finally done now though - a wasted day well spent! More please ....

Can anyone help me with normal, 39? This should be easy, but I just can't seem to break the string wall!

I got 243 points due to luck I guess. Not perseverance, but short times are awarded with extreme amount of points and I've somehow finished some(hard) levels under 10 seconds with the help of environment(and luck).
Also the method I've posted for level 49, is reliable in normal difficulty, but hard needs patience.

@RedRevolver
Sorry for late answer, but I didn't see your post earlier.

Roll from middle of three hanging platforms, towards green button. It will toss you to string wall

Oh my gosh, level 45 is playable when just starting the game!

One thing about the physics that bothers is me is that you can accelerate in the air. I realize this is a staple of a lot of platformers, but for a physics game it seems out of place. You should only be able to accelerate when you are in contact with a surface.

Why is the goal to pop the bubble, if it's there to protect us from "life dangers" ?

I didn't get that either... but when I read your comment, i went back to read it again... apparently they expect you to have a great deal of patience and wait for the writing to change for like "forever"
It says something about the bubble being too lonely or cold or something... I really don't read that stuff much...

But then here's another question... why pop the bubble every single level and not at the very end?

I didn't have that much trouble with the controls in hard... but it just got really boring with the same levels... i like the problemsolving part of these games... and since i had finished the normal levels, this was just a repetition... got bored and gave up on it.

There seem to be some odd glitches. On several occasions, the nail or other objects would randomly disappear. Also, on 42, I tried to pop on the nail, but started bouncing all over the place. 0_o

just finished it. it's a fun game, but something about running at full blast towards a nail that seems to be rusted and crooked, strikes a cord in my subconscious (the part which has my mom's voice screaming "don't you dare do that" at me)

im stuck on level 19
can someone help me
how do you break the string?

ummm. level 45 is playable at start but you need a password.can someone give me the password for lvl 45 to 50?

I spent like an hour tryin to break string on 19!

LEVEL 19 HELP!! is there a special place on the rope you should hit? I've been at it for 12 minutes and it won't break! any tips?

I finally got through level 19!! Took around 10mins
I just kept on banging back and forth really fast :-(

For all people having trouble with level 19:

on the wall to the right, there is a green pad that will shoot you really fast towards the wall. It's pretty accurate, so you generally have a chance of breaking it in a few hits. I got it in 1 before.

Level 19 - I've bounced against the string many many times and it won't break. What's the trick?

Fun game and great idea but I think the levels were a bit to easy I finished most of them in under 25 seconds. It did get a little harder near the end and had to give it a few tries but really not that hard to think about compared to other physics games but still its a good game I enjoyed it just wish it didn't end so fast needed more time to kill lol :)

Hit the button, hit the end of the se-saw that's facing down, then use it to rocket down and left.

It's really hard, espacialy because the controls are reversed.

first hit the red botton over the ns thing, then hit the wood pole to make it fall, then turn off the botton and go through the space by the pole.
i don't want to ruin the fun so i won't tell you anymore just leave a comment if you need more help though:)

@ miso:
If you scroll up the comments, gulaghad posted a solution for level 39 back on Feb 5, 09.