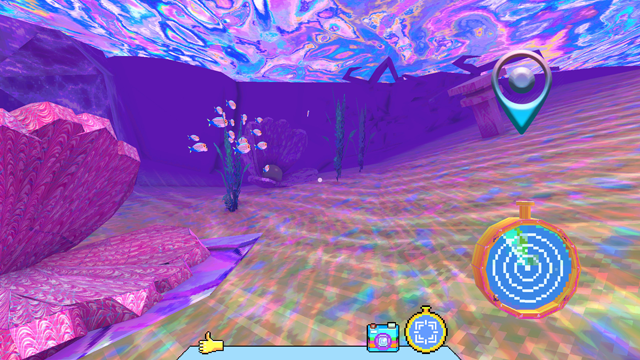 Welcome to the future. The supercorporation NATEM has formed and taken over the internet. Don't let the image of an old-fashioned, boxy and bulky computer on the tin fool you - NATEM has taken the idea of the internet to an entire new dimension, literally. Gone is the two-dimensional interface known as a computer screen, a notion that's so yesteryear. Now, you'll interact with the web in a three-dimensional environment, where web sites appear as physical spaces, ads appear in various places in-game, and you'll even encounter obstacles like malware. Oh, and did I forget to mention, the vernacular has devolved into that of an internet chatroom as well? Move over n00b, you're not even basic level yet!

Perhaps the most blatantly striking feature of Broken Reality is the color palette. It feels like no color is off-limits as vivid, trippy graphics dazzle you in every direction as far as your eyes can see. But it's not all eye candy in the world as you soon realize there is work to do. Talking to the other characters in this world - at least, those of them that are willing to spare you the time of day - reveals that there are quests to be completed. These come in many different forms, from gathering items to doing favors for people, and involve navigating every corner of this strange new world you find yourself engrossed in.

As you being to explore this very weird manifestation of the new internet, you may come to realize little annoyances bug you a bit like when you surf the real internet. A vivid cursor dances on the screen as you move about, distracting you. When you try and take some paths, a popup in the form those little ads we all know and love ("lucky 1000th visitor!" "free stuff here!") can intrude on your path forward. And of course there are all those ads from corporate sponsors from remotely familiar objects changed slightly to avoid copyright issues. Anyone want a Fat Kid? Apparently you do, because one of the objects of the game (a sidequest, as it were) is to gather as many "likes" as you can. And in this virtualized Facebook-like environment, you can like these advertisements, often several times!

But it's not all so bad. You'll even find that they are so eager for you to buy their stuff, they'll hand you a credit card that you can use to "buy" products and rack up more likes. It seems that these likes have suddenly become the ultimate currency that everyone is chasing.

Clicking on ads though, while novel for a bit, is not the only thing Broken Reality has to offer. You'll round up other tools you can use, such as setting up waypoints and teleporting across the map, and a camera you can use to capture points of interest within your focus, to earn you - you guessed it - more likes as well! You'll even get a tool to help destroy those pesky virus-ridden adverts blocking your way, but what it is you'll never guess. Go ahead, ask any of your IT friends - I doubt they'll successfully guess it either!

To navigate the game, you use [WASD] to move along with the mouse to pan the view. You can click to use your selected tool on the object you are facing. At the start, you have just a 3-D icon of a "thumbs-up" or "liker" tool, but you'll gather more as you go along. You can use [Q] and [E] to scroll through the list of tools as you acquire more of them, and further instructions for using things like the camera are given deeper into the game. Pressing [Esc] brings up the pause menu with options such as reviewing completed quests and a map of the area.

I quite enjoyed Broken Reality, although the map might be one area of improvement. It tends to show you more of an approximation of where you are, i.e. which of around 10 medium-sized areas you are in, and doesn't really aid you too much in navigation as tunnels, shortcuts, and blockades aren't illustrated on there all that well. But the discovery is fun, and it is nice to take time to smell the roses, even if one has to retrace paths several times to find out where everything is. The amusing and varied cast of characters throughout the game and areas will also surely keep you amused and smiling with their antics and gimmicks in their own cute little way. So if you need to take a break from reality and try a different one, go ahead and log on - just be sure and allot some time for the large file download beforehand.

Note: This game contains lots of bright images. If you have epilepsy or similar conditions, you may want to exercise caution in playing this game.