Do you remember the golden age of 2009, when in between chasing hoops with sticks and sipping tea with your pinky extended, you had your monocle pop out in astonishment at Alishah Novin's quirky online multiplayer webtoy/puzzle game? Well, though the original version was sadly taken offline in 2010 due to both being unable to handle the traffic as well as other problems like trolling and some persistent bugs, Broken Picture Telephone is now back online! 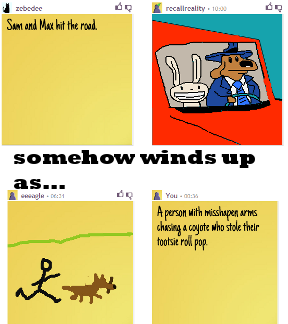 You'll need a free account to play, but if you enjoy showcasing off your amazing (or questionable) artistic skills, you'll probably overlook that. The premise is simple. Someone writes out a phrase (essentially an idea for a drawing), and someone else has to draw it. Then someone else looks at that drawing and describes what they think is happening in it, and someone else uses that description to draw their picture... and so on... and so on... and so on! You won't know what the other submissions or original objective was until you're done. The object isn't to win, but to entertain, and you can spend a lot of time just browsing through the archives of completed games and laughing at the results. Of course, at the same time, you're sort of relying on the community to police itself, and that means you can run into people deliberately ruining games, whether by ignoring the rules or posting inappropriate content without flagging it, so parents and players beware.

At the moment, playing is both easy and fun, though it seems like you have to wait an oddly long time to join another game once you've finished with one, though completed games show up fast for viewing. You also have to cross your fingers and hope for people to put in the effort, since the best results come from the most deliberately elaborate drawings and descriptions. With luck, this incarnation will have ironed out all of its kinks and stay around a bit longer, because the shock and amusement of finding out the description you thought you were recreating faithfully with your drawing isn't even in the same galaxy of what it started life as is a lot of fun.

Very honored to have BPT back on jayisgames!

I wanted to provide a quick note: there are a number of mechanisms to reduce trolling. One is to limit how much and how quickly new users can play. After some time, the restriction is removed. Thus is why it may take some time at first to join games.

I am so glad this is back up and running :)

Great to see BPT is back up after such a long down time. There are some new features that seem to take some getting use to but will probably help make better drawings in the long run. Site looks a bit more cleaner too which is great!

@kaleishealthy: I'm glad you like the changes!
As far as the new tools go, you can hone your artistic skills in the 'Playground' section where you can draw as you please - no time limits.

I've missed BPT - I'll have to check out the new version. I've been playing Eat Poop U Cat. Is it anything like that?

Wow, this is fun! :D
The time restriction for new users is a bit frustrating, but I can understand the reasoning for doing so. This kind of game unfortunately suffers a lot of trolling.

What a treat!! I'm so, so glad this game is back. Everything working just great so far! :)

I'd really like to try this game, but I can never get the verification email to work.

I jumped through some extra hoops in order to get an account. This game only allows you to play once. After that, it'll say "You are playing too quickly - please try again shortly." I have not been able to play again after several minutes.

@guest0831a I understand this can be frustrating - this limitation should only affect you for a few days (it's in place to limit trolling). Also, I know it's not a perfect system - I'm still working on the variables to find the right balance. If you have any ideas, send me a message on the site!

LOVE THIS GAME! I've spent all day playing it and it is fantastic!!! It needs a steady flow of people who know what they're doing to make it work nicely but until I run out of games I think I'm addicted :D

Great game, except there is an ongoing bug that prevents players from joining a game (public). I can start a private one to invite people but it will never finish as there is something wacky going on with the queue and both new and old players trying to join any game, but to no avail.