Briquid is a physics puzzle game from Gamious that quite neatly combines brick removal, brick creation, and flowing liquids. With a few simple taps it's your job to shift all of the water on the screen to the designated zones, all while staying under your movement limit and without wasting a drop of the precious stuff. It's a bit of an extreme brain bender at times, but it's just accessible enough to work! 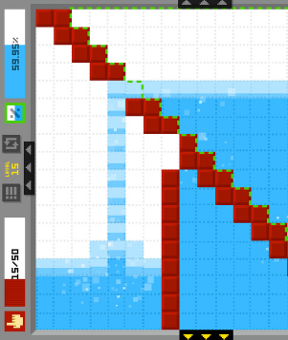 Simply tap an empty space to add a brick to the screen, or tap an existing block to remove it. Water immediately flows in the direction indicated by the gravity arrows on the side of the screen. After spending just a few levels getting the hang of conservative brick removal, you'll need to switch these indicators to shuttle the water where it needs to go. That means thinking three or four moves ahead just to keep everything in order!

Briquid is a simple concept built for the die-hard puzzle fan, and its retro look and feel certainly doesn't hurt, either. It's almost like Where's My Water? but on a grid and with a monumentally higher level of difficulty. The only real drawback is it requires a tablet to play, as the concept would take some effort to fit on a smaller screened iPhone or Android device. But if you've got the equipment, Briquid is a fantastic puzzle game with 100 levels to charge through!

Working on a walkthrough for the ones I have managed to figure out now. Some of them I've not figured out, and I'll give the closest I've gotten.

I do not expect to get to play all the levels in the free version, but being that they are completely separate it would be nice if somewhere it tells you that the free version ends at 25, so you expect it.

It was quite fun.

A couple levels were very challenging and if I got the full version I do not doubt that there would be more of those.

I recommend this puzzle game.