BRICK[bricksmash]SMASH, by Alan Hazelden, is one of those rare games whose title describes it perfectly. It's a bunch of tiny Breakout clones within a Breakout clone. You start with one ball and one life, but you won't be removing any bricks right away. Instead, each time your ball hits a brick, it spawns a tiny ball inside that brick. You can keep those tiny balls alive by keeping your paddle under them. Once all the tiny bricks within the brick are removed, the big brick goes away and you get any surviving balls from inside that brick. Pretty soon you'll have a rainbow! Just make sure you have at least one large ball in play at all times, or you lose. 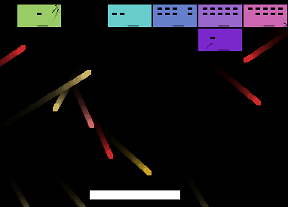 Gameplay is simple: use the mouse to move the paddle, or select the lower right option on the title screen to switch to [arrows]. BRICK[bricksmash]SMASH is an easy game, but since you're scored on both time and number of large balls you have in play at the end of the game, there's still an element of challenge. Between that, its visual prettiness, and the lovely sounds that happen whenever a ball hits a surface, it's quite a smashing game. Just don't try replicating this with real bricks. Either you'll end up with a concussion, or completely warping reality as we know it, neither of which is good.

You do not need to have one big ball in play at all times. One small ball is enough.

I think HopefulNebula meant the little balls that are released in the bricks when you hit them.

The big balls are the ones that the bricks themselves turn into.

Brickception. Fun until lag kicks in. Colors are groovy.

I got 1:13 and 71, by concentrating on the end blocks and making sure as many balls were in the top area where I didn't have to worry about them

Short and fun. It's pretty easy if your goal is just to survive, and the scoring gives you an incentive to replay.

The way how the screen starts filling up with balls towards the end is fun to watch and makes it worthwhile to try to do better just to marvel at the chaos.

new twist on a classic

The musical balls or is it bricks are an added bonus

I'd like this with more levels. It would add to the chaotic fun.