You know what's hard? Rolling a brick. Those heavy prismatic blocks are meant to stay still no matter what. You know what's even harder? Making a brick jump. In Brick Roll, a tricky puzzle platformer by Gavina Games, you've got a brick that can do both of these things with ease, but that doesn't make navigating a bunch of spike-laden levels any easier! 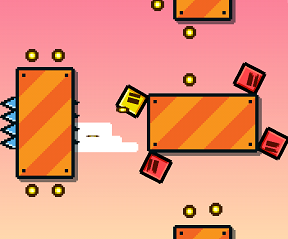 At the beginning of each level, your yellow brick will start to roll around the outside edge of the block, without stopping for corners or hazards. You can reverse the brick's direction by tapping the left side of the screen, and tapping the right side will give you a flying leap straight up (from the brick's perspective) until you hit another block to land on. This jumbo-sized jump is the key to getting around the level, as well as a powerful weapon; jumping and landing on one of the enemy bricks will knock them out of the level. Collect all of the yellow dots and return to the door to complete a level, but running into hazards and enemies from the side and jumping off the map will cost you a life. Lose three lives, and it's game over!

Each world of seven levels introduces a new element to the gameplay, such as static enemy bricks that fire projectiles at you or spikes (evil, eeeeeee-vil spikes). While the levels might seem samey after a bit, they're really well-designed and challenge you with tiny variations that keep the game fresh. For the completion hound, each level has a secret area with a bonus gem to collect, usually by making a leap to a platform that's barely noticeable unless you keep an eye on the edge of the screen while rolling around. It might take a bit of patience to get the hang of the flip-flopping and jump timing necessary to dodge some obstacles, but when you get the hang of it, Brick Roll is a quality game that's bnever gonna bgive you up, bnever gonna blet you down. (Come on, you knew it was coming.)