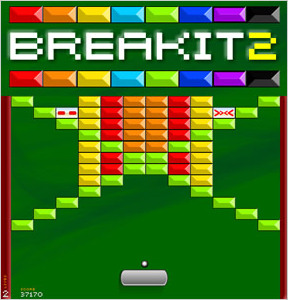 Breakit 2 is a brand new game from Terry Paton in which he takes classic gameplay elements from Breakout and Arkanoid, and energizes them with stunning Flash graphics and a high-tech soundtrack. The result is a gorgeous game that is a lot of fun to play.

Simply move the mouse to control the paddle and use it to keep the ball bouncing in play. Eliminate all of the bricks on each level to move on to the next. Catch falling points to add to your score, and catch special falling bricks for temporary power-ups such as multi-ball, large paddle, and speed-up. Beware, however, as some power-ups may not be very helpful.

Analysis: What is especially nice about this implementation is the way the paddle tilts when the mouse is moved. The angle of tilt affects the direction that the ball bounces off the paddle and this helps create a sense of immersion with the physics of the game. A very nice touch. I also liked the vocoder sound effects that announce the various events in the game.

The game is not without a few problems, however. The collision detection between the ball and a brick seems to fail at times, which allows the ball to travel right through the brick unaffected. Although noticeable from time to time, the issue does not occur frequently enough to significantly impact game play. Unfortunately, the performance of the game was not playable on my measly wimpy Mac G4 and I therefore had to use my much speedier PC for play testing.

Simple and accessible, casual gameplay in a bright and beautiful package.

Update: Terry's site is back!

Very cool. I still think that Miniclip's Smashing is the best in the genre, but this one has got some cool features that it doesn't.

I love how the "bat" tilts as you move it, helps you better visualize how speed of the paddle movement affects the direction of the ball, first time I've seen something like that, very cool.
I also love on the multi-shot bricks, the vertical lines down the center. Other games have had similar ideas, but I think that's the slickest..
The voice notifications of what you got is also kind of cool, but, I dunno if other people feel the same.

Now.. if somone could just combine this and Smashing, you'd have the ultimate breakout..

This game has some really nice visuals, clean and bright and pretty, but for me the controls and the clipping problems are too much.

The ball passes through the bat, only to bounce off after it's gone through, especially when you're moving the bat to catch it. In a single level, I've seen balls pass through bricks five or six times. Moreover, the paddle is speed limited, which makes the game feel laggy to me, even if it's by design.

In my experience, nothing can touch BreakQuest (for originality) and Ricochet. Both have amazing flawless gameplay that put this game to shame, at least in its current state.

Nice, I'm a big fan of Arkanoid. The tilting bat is a nice feature, would be nice to be able to click and hold to keep the angle.

I was so excited when I saw this game because I think I would love it.. BUT.. I got this message.. "Account for domain terrypaton.com has been suspended" :(

Apparently Jay now possesses of such sites as /. and Digg and has been able to crush Terry Paton's puny site in his gargantuan, casual-gaming claw.

Just so you know!

Great site, by the way, love it.

Wulfo beat me to the ominous slashdot allusion... You're going to have to consider this possibility when reviewing in the future, jay, lest ye crush gaming sites.

I remember playing the first on Newgrounds, so it's just as I suspected:

Aw man..and after reading the review I was all set to start playing this game. >

Don't you just hate hosting providers that can't handle a little boost in bandwidth consumption?
I do.

Terry's site is back online, for anyone who missed it the first time around.

i don't know, this seems kind of a tedious version of the game to me.

6,552 Views
3 Comments
chrpa— Jayisgames needs your help to continue providing quality content. Click for details In a popular Neat Escape's restaurant you went to the restroom, and stayed there. Not voluntarily. You order is being prepared, you're hungry and thirsty but you can't...  ...