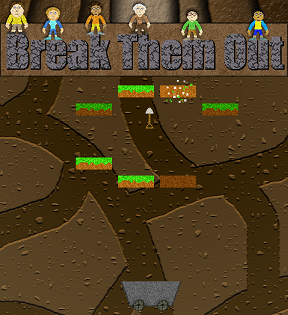 It seems to be a common trope of Breakout-inspired games to offer a specific motivation for why the player should be busting through all those helpless bricks. Jardinains gave you the chance to exact some measure of vengeance against those friggin' gnomes. Peggle offered you a diploma from its suspiciously-accredited university, and so forth. However, Break Them Out, Maqpie Games' entry in the 9th Casual Gameplay Competition, might be the first time that Breakout is made personal. You see, either by way of a terrible mining accident or through the machinations of an angered Hutt crime boss, your best friends have become trapped in the very blocks you seek to explode. It is up to you and your flying pick-axe of destruction to break the bricks, rescue your friends... and grab whatever loot you can along the way.

Controls are nothing surprising: Using the mouse, guide your mine-cart back and forth to bounce your pick-axe-that-looks-like-shovel into the blocks hanging overhead, losing a life if you let it fall beneath you. Some blocks break with a single bounce, others require multiple ones. When the blocks do break open, various precious ores will spill out: Catching them will grant you bonus points. Watch out though: some blocks contain stalactites, and if catch them you'll be stunned for a precious few moments. Most importantly, one block a level contains a friend of yours within, and man, won't you feel like such a heel if you let them drop? What's more, if you catch them, you can select them to come along for the next level. There they will grant you various abilities: speedier cart control, a chance to aim the shovel, an ore-attracting magnet, or rocks thrown at the overhanging bricks. There's seven friends to rescue and three bonus levels besides. Let's make sure the gang's all here! 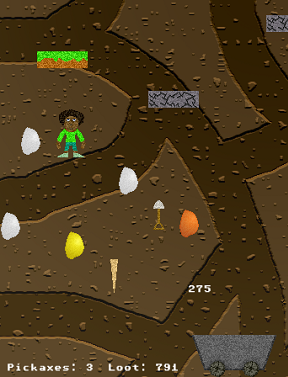 Analysis: Honestly... Breakout-style games are pretty hard to screw up. There's something inherently appealing about zooming a platform left and right while a careening ball (or pick-axe) slowly but surely decimates everything in sight. There's the tragedy of barely missing a block you were certain you were going to smash, and the triumph of finally taking out that final one that took, like, forever to get. What more do you need? Break Them Out solidly hits all the right notes of the Breakout theme. For a CGDC9 entry, though, you want the variations to succeed as well. In this case they generally do. Discovering all your "friends" makes for a neat little gimmick that will keep you playing. The choice of permanent upgrades acts as a useful balance against the more random aspects of the genre. Finally, I found the visual style interestingly unique. I'm certain that some will think it ugly (and the brown pick-axe against a brown background was sometimes hard to track), but I thought it evoked the graphics of mid-nineties Windows shareware. It might be the nostalgia talking, but I dug it.

There are some negatives to address. For one, I wish that the "Friends" theme had bit better integrated. Some of the competition comments questioned whether the power-ups could have just been represented by magic gems or something, and I have to say they have a point. It would have been nice to see the friends hanging out between levels, or even just have them peek their heads out of the cart during play. A bit more variety in the power-ups would have likewise better established the personality of your in-game "friends", who otherwise felt pretty interchangeable. This might be more of a problem in a longer game, but with just ten levels, you'll probably be left wanting more.

The biggest concern with Break Them Out is its abject familiarity. Yes, Breakout is always fun. But the CGDC looks for innovation too, and it's a little hard to find when the core gameplay hails from 1976. The new in Break Them Out just doesn't outweigh the old. That said, in a competition designed around "Friends", familiarity might not be all that dire a problem. After all, a game based in a classic style can be akin to meeting an old acquaintance for a cup of coffee: the time spent will cause no grand revelations, but you'll be sure to enjoy yourself.

Play Break Them Out!

I like it! Only one thing: the cursor moving in the playfield along with my mine-cart. A bit disturbing. (Maybe only in my preferred browser - Opera?)

The cursor shows in the playfield in Firefox too.

I didn't find that as annoying as in some breakout games where the cursor is invisible. In those games, it's impossible to tell that the cursor has gone out of the playing area until the paddle stops moving.

(But I still had trouble with losing control of the mine-cart even with the cursor showing. I guess I need more finesse.)

It's really cute and would be playable if the cart didn't lag every time you break a brick. It means catching the 'ore' is difficult if you also want to catch the shovel!