[Note: This game contains content that may be upsetting to some people. Please refer to the warnings on the official website to learn more if you are concerned.]

Every family has its problems, but Shuuki's has never been the same since the accidental death of his twin sister four years ago. The blame landed on Shuuki's older brother Natsume, who's now nowhere near as reliable as he used to be, though he tries his best to take care of Shuuki and their brother, Masaharu, even though none of them are as close as they used to be. Still, they all care for one another, even if none of them quite know how to express it or can get along for long enough to try. That all changes the day Shuuki discovers Natsume murdered, and a stranger offers him to a chance to fix everything... but nothing is ever that simple. In Cyanide Tea's gorgeous indie visual novel thriller Break Chance Memento, Shuuki finds himself not only desperately trying to save his family, but on the hunt for a time-skipping serial killer who can't be stopped by ordinary means. Using his new ability to travel through time using objects that connect to specific dates and people, Shuuki is certain he can fix everything... all he needs is enough time, and he has all the time in the world... right? A thrilling adventure with engaging characters and more than enough heart to go around makes Break Chance Memento one to catch. 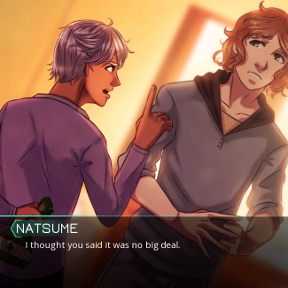 To play, just click the choice you want to make whenever you're presented with options, and click to advance dialogue. You can save or load at any time by right-clicking to open the menu, which you may want to take advantage of given the way choices can change outcomes. When Shuuki gains access to the bracelet that lets him travel through time, you'll need to find specific objects called mementos attached to the relevant people and time frame you're looking for. (Don't worry, the game won't make you test items over and over until you find one that works as a memento.) The machine can store up to five, but while some items can be scanned over and over again, others are perishable, so get them when you can. Finding mementos means searching various areas for objects, and each one can take you to a different location and point in time... though only for a short amount of time. You can actually use Stealth Mode for time traveling when you just want to observe, and Active Mode for when you want to take part in what's going on. 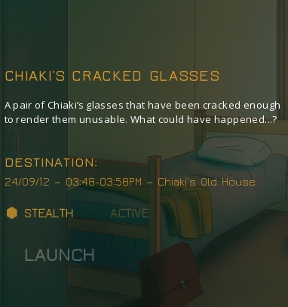 Unfortunately, Shuuki can only time travel during specific points in the game, and while time doesn't pass in present day if Shuuki is traveling in Stealth mode, using Active mode means the same time will have passed in the present day when he returns to it. While you don't actually have a timer ticking down, Shuuki will tell you how much free time he has, and it's up to you to decide how to spend it. Each memento will display how much time it takes up, so while you can dawdle as long as you want in Stealth, Active mode means committing to that entire memento, and when you return to the present, that time will have been removed from what Shuuki has left. As a result, you'll want to be careful how you manage Shuuki's time, especially later in the game when it becomes more important to decide what mementos to keep and discard. It's not all tears and serial killers, however. By using mementos, Shuuki can change his interactions with his brothers and friends in various ways. It might help him understand them a little better... or it might open up opportunities for romance with one of the other young men in the dorms. I mean, it's not like using a time traveling device could have far reaching and unforeseen repercussions, right?! Ha! Haha!... ha... 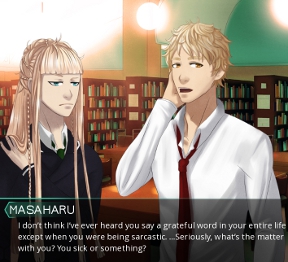 Initially, Break Chance Memento starts out perhaps a little too slow, with all of the prologue, the first chapter, and half of the second devoted to establishing character history and relationships with very little player interaction. During this time, Shuuki does little to endear himself. He thinks of himself as clever, but he comes across more as callous, goading others and lashing out at them before they have a chance to hurt him. Of course, Shuuki's got good reason to be sour. His inability to find someone he really connects to who appreciates him means a long string of ex's, and his "promiscuity" makes people judge him unfairly and wrongly. As you see him interact with his brothers and friends, however, you get to understand him a little better, the way others might if they took the time to do so. This is a recurring theme throughout the game, as Shuuki himself realizes how little he really knows about his brothers as people, making assumptions in the same way others have about him in the past, and watching him slowly grow a deeper appreciation for the people who matter in his life is extremely rewarding. It may take a while for them to open up as Shuuki learns more about them, but the rest of the cast (and, yes, eventually Shuuki himself), are all pretty darn likable and realistic too. 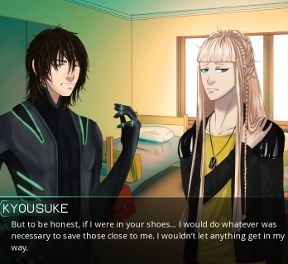 The game's serial killer plot is actually really intriguing, though sometimes the tone struggles to balance goofy moments in the middle of dark events to keep Shuuki from being too crushed by dread and melodrama. Fixing Masaharu's murder is the simplest and most straight-forward. For others, you'll need to do actual sleuthing that involves traveling around town and juggling the various mementos you find. It actually feels like putting together the pieces of a puzzle instead of being lead around by the nose, and as a result, you feel like you're taking an active role in catching the killer and saving the victims instead of just clicking through text and pointing Shuuki in the right direction, though sadly these more involved puzzle-like sequences don't happen as often as you may hope. There's something a little Persona 4-ish about it all in a very good way, chasing an unknown killer who always seems to be one step ahead and trying to save people before you run out of time, though there's something a little hilariously Peter Parker/Spider-Man in the way poor Shuuki has to contrive ways to constantly change clothes to avoid arousing suspicion as he travels to and from the past.

Break Chance Memento's time travel mechanic is actually pretty clever. The differences between Stealth and Active mode allow you to think and explore your options, while at the same time providing a plausible reason as to why Shuuki isn't just flipping through time periods whooping at the top of his lungs to fix everything like Doctor Zoidberg Who. Figuring out which mementos to use, and how, is actually a lot of fun, though it's a little frustrating that the game still treats everything as an hour of time regardless of how long the memento lasts. If Shuuki says he has an hour, for instance, that hour is used up by whatever memento he chooses to use, whether the description says it lasts the whole hour or not. Because you have limited times to use mementos, however, you're always left wondering what would have happened if you had gone a different route, leaving you eager to replay. It doesn't hurt that Break Chance Memento is absolutely gorgeous, either. Some of the most beautiful scenes are those that take place outdoors at dusk, where you can see the way time has gone into painting characters with beautiful light effects. So much detail has gone into making Break Chance Memento look polished and touchable, from casual conversations to tense revelations, that it's incredibly impressive. Even the backgrounds, areas of visual novels that are often less memorable, are beautifully drawn, especially any taking place outside. (Those leaves! Those colours!) Cyanide Tea are no strangers to quality visual novels, but they've clearly pulled out all the stops here, and after four and a half years of work, it was clearly very worth it.

Your first playthrough will likely clock in around the six or so hours the developers estimate, and with eight different endings, not to mention the way your choices can make the scenes you see unfold in subtle different ways, it's packed to the gills with replay value. You'll see a lot of different scenes and content depending on how you play. Though it was slow to hook me, the more time I spent with Break Chance Memento, the more I got sucked into it, both the characters themselves and the mystery of the serial killer. Some of the twists are pretty surprising, though the more fantastic elements of the plot almost get overcomplicated towards the end, though Break Chance Memento still manages to tie everything together well enough for a pretty satisfying confrontation... depending on the ending you get, of course. Pulling Shuuki away from the main plot to potentially get romantic with someone feels a little odd, mostly because the events he's going through are so traumatic you can't really imagine someone not pursuing them single-mindedly, and it's hard to think about dividing your attention as a result. Unlike a lot of visual novels, however, even if Shuuki doesn't wind up with romance, the game doesn't portray him as a sad, loveless soul, and you can still get a very fulfilling ending for him. Break Chance Memento is by turns intense, dark, and sad, but also sweet, funny, and tender. If you're looking for a visual novel with an engaging cast and a twisty plot, do yourself a favour and pick this one up.