Available on Uminin's Flash Game Zone, home of several other previously reviewed works, the curiously named Brain Force is not very intellectual. No, Brain Force is purely an elegant exercise in agility, a beautiful example of how little is needed to make a successful twitch game. 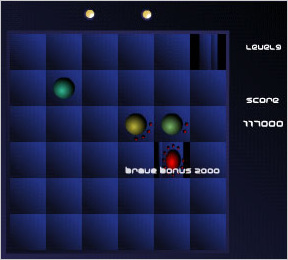 The playing field consists of a 6x6 grid of tiles which, randomly and at increasing speeds, flip over. You must reset each flipped tile by clicking on it before the attached timer runs down and explodes. Flipping a tile earns you 100 points. You can earn a Speed Bonus (+500) if you flip it immediately after the timer is exposed, before any dots are visible. The dangerously tempting Bravery Bonus (+2000) can be won by flipping the tile after the 10th dot on the timer appears. The game ends when a single tile is destroyed. Afterwards, your score is ranked and, cryptically, an IQ is assigned.

The rules of Brain Force are simple and the end is inevitable - you will fail. Similar to classics like Space Invaders or Qix, Brain Force is successful in spite - or because - of it's simplicity. The only goal is to do a bit better than the time before and, if you've got an itchy mouse finger, sometimes that's enough. Click.

i literally cried while playing that game. i was so afraid to blink at the end that my eyes water eyed and it got blurry.

I hate these type of games, so I don't feel bad cheating if I play:

Just keep pressing and to play forever ('Cause it's a Flash game...)

Misses the whole point, I know.

Press TAB and SPACE over and over to play forever.

Mikey - It's probably not so simple; people still replay Galaga today, though I'm sure nostalgia factors into that. Replay Value is a very personal thing, I think.

A grade, hint is that if you let the ball get red before you poke it you get 4x as much as you would get for clicking it early.

Jay you are amazing. My number one site for many months now! I wanted to say that the music for this game is so similar to the opening of the song Dirty Diana by Michael Jackson--has anyone else picked up on this?
--nicanica

There's a trick to cheat at this game and never lose. Shhh. Flash designers probably caught it.

The end the game sems to be encouraging (certainly a lot more Brain Forcing than just clicking the squares as soon as they come up) is going for the bravery bonus every time. Got 404k rank AAA this time through.

Thank you, Marion!! You're welcome here as often as you like. =D

And I'll never give up as long as people like you continue to visit. Cheers!