Warning: Parts of this game contain flashing lights that may trigger those sensitive to it.

Did you hear the story about the running physicists? No? Well, let me tell it to you: Once upon a time, two physicists and their robotic assistant went running through a super collider to discover new elements. Sometimes they succeeded; sometimes they failed. The End. What do you mean that wasn't very entertaining? Well, maybe I told it wrong. Ian MacLarty and Jon Kerney do a much better job in their indie jump and run title, Boson X for iOS, Android, and PC, Mac, and Linux. Yes, there's running along moving platforms. Yes, there's jumping back and forth upon said platforms. And, yes there are definitely lots of failures in this seemingly simple task. LOTS. But they're of the kind that will make you say "Dang! Okay, just one more try". 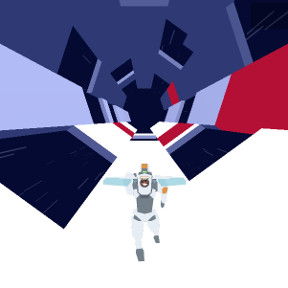 Each of the 18 levels has you running down a maze-like corridor inside a particle accelerator. The fun part is you get to see this pathway assembled as you run. The even more fun part is you then have to navigate it at particle-breaking speeds to collect enough energy to discover the subatomic matter of your choosing. Controlling your desired runner through your desired course is easy as pi. hurr, hurr You start the level on one of the 10 edges inside the corridor. You can jump straight up to avoid obstacles or clear gaps with up. To change what wall you're running on, press right or left to go in the corresponding direction. And to jump further, press longer! Now, slam against an obstruction or slip through into the quantum abyss and it's time to restart. On the other hand, reach 100% energy, and it's time to move onto the next particle's particular passageway.

What MacLarty and Kerney have done so well in Boson X is create an experience that has you wanting to keep trying a level over and over again despite the high difficulty. And with a sort of randomization in how the level itself is assembled, even attempting the same level is not the exact same experience every time. Where a player may become frustrated with the game is in how the later levels can seem to become a test of memorizing the best route for a given set of platforms rather than simply testing one's reflexes. But for just a couple of bucks, Boson X can be forgiven this as it will keep you occupied for hours jumping between platforms to bright, colorful graphics and funky electronica beats. In the name of science!

Windows:
Get the demo Get the full version

Mac OS:
Get the demo Get the full version

Linux:
Get the demo Get the full version