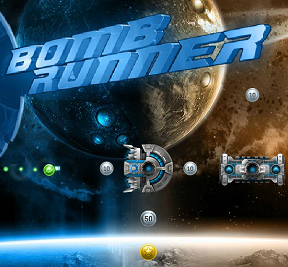 Do you like mini golf? Sure, we all do! But it can seem a little unexciting, especially when it's put right next to the go-karts and the skeeball. So how can you jazz it up? Well, if you're Core Studios, you put it in space! And add explosions! And trance music! And lens flare! You'll find all that in more in Bomb Runner, a physics arcade game. Admittedly, Bomb Runner doesn't call itself minigolf, but it's what any game with a central "Use the mouse to drag on a ball to determine its direction and speed, attempting to reach a target in as few shots as possible" mechanic can't help but look a lot like. To be fair, the sleek metallic aesthetic and numerous targets to hit, make pinball just as much of an inspiration.

With 24 levels (including three surprisingly fun boss fights), and its comprehensive achievement system and upgrade shop, Bomb Runner has quite a bit of replay value, even if, near the end, some of the shots seems to require as much luck as skill. Still, Bomb Runner is an entertaining diversion that's well above par... or below par... Which one is the good one again?

It's like all those years of precision barrel-blasting in Donkey Kong Country are finally paying off. I love this game.