Bola is a casual and enjoyable puzzle game created by the developers at Gamesheep.com, the same folks who brought us Manole and Makos. The goal of the developers who host the site is to eventually populate it with all their own games, and Bola is not a bad step in that direction. 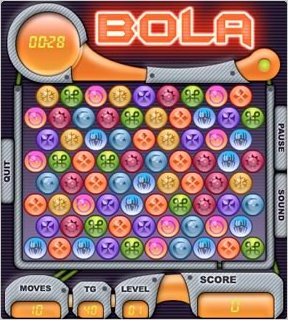 Bola's gameplay is similar to that of Bejeweled, except Bola works on a hexagonal grid rather than a square grid. Players click to select and swap two glass balls in order to make rows of at least three balls in any direction. One innovation that sets Bola apart from other games of this sort is the hex-based structure: It's kind of fun to clear a set and watch all the balls above cascade down and settle into a new pattern.

A few levels in, a new color of ball is added, and then some steel balls that cannot be swapped or popped. Aside from this, an increasing quota is the only increase in challenge. In a position where no moves are possible, the field resets with a three second penalty. And even from the first stage, Bola's pace can seem a bit frantic, especially with the number of balls required to clear the stage in the alloted time; makes one wonder how the top 50 scorers managed their impressive achievements.

The graphics are nice, but nothing flashy. Some of the balls are the same color with a different picture, and only matching color and pictures make up a set. Depending on preference, this might be a little annoying, or it might just be part of Bola's challenge and charm. The sound of the glass balls popping and clinking into a new position is good, but unfortunately there's no option to allow the effects while muting the tiresome, tinny looping music. The yellow-on-orange display is also a bit frustrating, making it difficult to track the score or number of balls still needed to clear a stage. And I noticed once or twice that the computer registered no possible moves when there was at least one that I saw.

But these quibbles aside, Bola will quite possibly keep you coming back for a quick game from time to time, especially with its hex-based twist. It definitely deserves checking out, along with all the other games at Gamesheep.com. Click.

Some of the colors are literally indistinguishable on my monitor, and apparently I'm not the brightest bulb in the box, because it took me a few minutes to figure out that each color had a different SYMBOL as well. I thought the symbols were just for pretty at first, probably partly because some of the colors were identical so it looked like blue (for example) had multiple symbols.

It seems like certain moves on the hex grid just cant be made for no decernable reason, thats why the computer would have told you no moves, even if you saw one, that one might not have been a move you could actually make.

who thought that music was a good idea? someone actually chose to include that...and they should suffer for their actions.

It steals the idea from that game without changing it, but does present it better...

Role, I was ready to post that this game reminded me of "Bounce Out", but you beat me to it.

However, I prefered Bouce Out over Bola. I found Bola to be a little bit sluggish, and the time constraints too short.

I did like that the clock paused while the game was removing my matches, however that didn't make up for having only 40 seconds to complete each level. I like a level to last a little longer than that.

It's a nice game, but I'd rather kill an hour playing Bounce Out than Bola.

Oh, Florin, why don't you put separate music and sound effects controls in all your games?! The music in this one is bad, and yet the sound effects are good! I want to be able to turn the music off while enjoying the sounds.

Also, there is most definitely a bug in which the game logic determines there is no move and there was a move.

Overall, the game is very pretty and I love to play with all those different colored orbs. A nice twist to the match-3 formula. Lots of fun! =)

I would just like to make note that most of the player in the TOP 50 use Robot Softwares that play (nearly) themselves and are tireless.

The beauty of the score is here in the art of programmation but not in any other human skill.

With Bola the score, even with a Robot, is limited by a bug that appears when you enter the level 101 (screen frozen !).

Others bugs I came up with, like already written, is that sometimes they are moves that Bola doesn't see and more rarely three correctly lined balls doesn't vanish.

yes, this game has lots of bugs. one time it froze at level 2 even though I already have the latest version of flash player, and it is very slow for me even though i have a relatively new computer

I prefer bounce out over this. The little balls are very cute but it's so hard to match the color and the pattern. Also, they should have an "easy", "difficult" and "frantic" mode (or something of that sort). It's pretty diffcult to even get past level 10 or so for me.