It's not easy being the modern equivalent of Robin Hood. All he had to contend with were a few half-competent sheriff's henchmen. These days an honest, hard-working thief can't catch a break, with everything from security cameras to laser beams plotting against him. Which is why Bob needs your help once more, in Bob the Robber 2, a great little stealth puzzle platformer by Meowbeast. 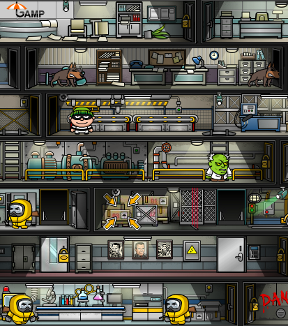 Creep around (rather loudly, for a thief) using the [arrow] or [WASD] keys; use the up [arrow] to interact with objects, and the [spacebar] to whack unsuspecting guards. You also have three upgrade slots, bound to [Z], [X] and [C]. Your task is to reach a certain goal (you can't miss it, it's surrounded by arrows), and then make your getaway. Keep away from any creatures/pieces of technology you see guarding the rooms, or you'll set off an alarm; if you set it off four times, you're busted, and then it's back to square one.

There are lots of improvements compared to the original game. For starters, there are ten levels instead of five, and there's a shop where you can buy upgrades. Every time you pick a lock or mess with the electrical box, you get a tiny mini-game, and don't they make everything better? When you knock someone out, you now have a timer so you know exactly when they'll wake up, which really comes in handy. The levels all fit into a single screen, the graphics are improved and the music is toned down a little. The difficulty curve is similar, meaning that it's well calibrated and strikes a nice balance between using your brain and your reflexes. Another fun feature is the fact that you can adapt the gameplay to your own temperament, and either rush through the levels or try to be patient and stealthy.

Now to end with a pun. Bob the Robber 2 is a steal at this price? No, it's a free game. It's criminally entertaining? Laaaame. It'll rob you of your free time? Yes, alright, let's go with that one.

Before anyone starts to think level 10 is broken, it's not. They don't tell you, but you have to beat the clock on that level or you automatically lose.

I usually like stealth games but this one doesn't seem to work for me. I can pretty much ignore cameras as the alarm means almost nothing to impede my advance in the game. Knocking out guards is so easy and with no consequences.

Design flaws are expected in very innovative games but this isn't the case.

I don't mind this, though it gets boring very quickly. Cute graphics and easy game play... a bit like a Fisher Price version of Trilby, Art of Theft.

It's not much of a stealth game when you the consequences of getting caught and beating up guards are so minimal.

"I've been hit over the head and rendered unconscious, should I raise the alarm? No, it was probably just a cat."

Yeah, you can see the countdown timer just over the objective arrows in level ten, but I keep getting caught before the countdown reaches anywhere near the end, and without my alarms all used up. It's really confusing!