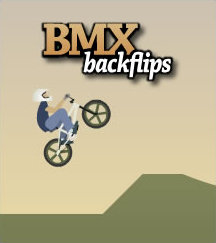 A brand new game just released by David Thorburn, BMX Backflips is another marvel in Flash game design. The game has you navigating hills, half pipes, and jumps on a BMX bike, while performing wheelies and backflips for points. The game is mission oriented and presents various levels of increasing complexity. This variety combined with solid Flash programming, smooth animation and realistic physics is what makes the game shine.

The only downside: sound is sorely missing from most of his games. But that's a small complaint compared to how enjoyable his games are. David tells me that he aims towards minimalism in his designs to compensate for Flash's lack of power. And his games are a testament to those who emphasize gameplay over graphics: they arguably create the games that are more fun to play. Click.

Be sure to check out all of his games on his Tea Games website. And read what I previously wrote about them here. Click.

why does'nt it let me play bmx backflips on any computers that i go on i am really getting anoyed with it. It is so stupid

I don't seem to have a problem playing from my computer. What exactly is the problem you're experiencing?

why cant i play on bmx backflips, why is it filtered?

If you're trying to play at school, it is quite possible that your school has banned the site. I learned recently that RIT received word from a prep school that they have banned RIT's domain due to Flash games being offered here. Hmm, imagine that.

Another problem is that David Thorburn's games have become so popular that there is a serious lag in serving up the games over the Web. Patience is required. Suggestion in this case, click on the game and then go have lunch. When you come back the game will be ready to play.

It may also depend on what time of day you try to play. Prime time hours during the day are generally between 9AM and 3PM, so if you need to play within those hours, you are competing with everyone else for server time.

This game is brilliant.Where is freeware BMX Backflips?

Somebody knows why this game is too slow? In another pc is faster than mine!
Thanks for answer.
:)

Are there any other places to play this game besides teagames.com and mousebreaker.com? My school network has blocked those two and I cant find any others.

yeh can anyone tell me were u can get bmx backlip other than mousebreaker and teagames?????

Sam - you might try writing to David Thorburn of teagames since he developed the game. If it's available anyplace else, David is sure to know.

This game is pretty cool. It would be even better if you could do more tricks.

yea, i dislike the lives part, sometimes it just takes a little bit to get what to do.

and you get points for doing frontflips and such but it just doesnt say "nice frontflip!"