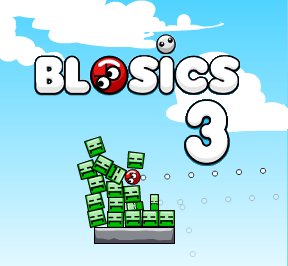 Click and drag, launch a ball, and knock stuff off a platform. It's a simple premise, but Igrek Productions has used it to steal the time of many a gamer. Now the popular series of physics shooters is back with Blosics 3. The blocks and bullets are anthropomorphized this time around, but whether or not the sprites have eyes on them makes no difference when it comes to the choice gameplay. Blosics 3 keeps the quality for which the series is known, as well as the innovation within the bounds of its formula. The 1-3 star ranking system is a nice inclusion, and the later levels have that touch of cruel-but-not-too-cruel difficulty all designers aspire to. Like its predecessors, Blosics 3 is best in short bursts rather than marathons, but it will prove quite satisfying to both fans and newbies alike.

Play all the Blosics games:

It's a well crafted game, the graphics are nice and clean, the background music is nice... but jeez who thought those voices were a good idea! SO annoying, which is a shame because is does detract from the gameplaying experience. Amusing for like 5 seconds then I just wanted them to shut up! Had to go and mute the SFX in the main menu options just to keep playing. Yikes. Other than that, it's a nifty little game!

Honestly, I think this is a huge step down from the other Blosics games. The levels are repetitive, the special balls are boring (that is, less strategically useful than those in previous games), and the block voices are grating. I'm bummed out! And I miss the cool zooming noise that the balls used to make!

Jay... This game sucks. I cannot even get the blocks to move. I love your sight and usually they are really good. But I found this game to be a bust. I love blosics but not this one. Thanks

ok reasons... duh.. The blocks are unmovable once down. And there is no way to switch the size of the balls or power.

This is the first time I can recall ever seeing a game sequel that REMOVED features from its predecessor.

For everything good it added, there was a good thing it took away, and ANOTHER thing it added that was terrible.

It added the three weights of point blocks (which I like), but it removed the good special balls (the freeze, the black hole, and even the E-detonator), and added the godawful voices.

It added the three tiers of scores, but removed the special challenge phases, and added the extra selection screens.

There were a couple of fun stages, but I can't help but notice that the best ones shared remarkable similarity to certain levels in Blosics 2, and the new-ish ones were just aggravating. With games like this, level design is important, and most of the "challenging" stages were just frustrating.

And there is ZERO reason to have to switch to another screen just to select a different ball type.

So no, sorry, but I was disappointed in this. Blosics 2 was great, but this is a shocking step downward in quality.

Sadly, I can only agree with the above people. Had lots of fun with Blosics 2 and the level pack last year, but this is just terrible. The voices would've been fine if they were less frequent, e.g. only on hits/tumbling.

I have not played the previous iterations, but this one sucked.

Also, the stage-select menu no longer has pictures of the stages, so when you're trying to find a specific one, you have to blindly try each one in turn until you find the right one... and it takes three clicks to try each one.

There was another game like this, balls and blocks, and you wanted the green blocks, not the red. Had levels where if you hit a block, more would appear from it...anyone know what this game was?

It isn't red remover, has same premise as blosics.

This is terrible. I gave up almost at once.