Not sure you were aware of this, but balloons have some friends that appear to be a thorn in the side for the world's monkey population: bloons. The bloons never diminish in number no matter how many bloons-related games are released, and the air-filled fiends are still going strong in Ninjakiwi's Bloons Tower Defense 5 for iOS devices. In this tower defense strategy game, it's time for you to prove that you paid just enough attention in history class to know how to place troops but not enough to hinder your gaming expertise! 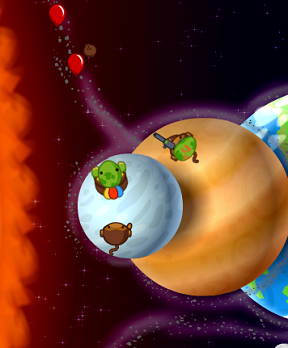 The mechanics for the mobile version are the same as the browser game. Your job is to stop the bloons from reaching the end of each map by placing towers on the map in strategic locations. The amount of lives you start with, the price of towers and their upgrades, which maps are available, and the ferocity of the bloons are all determined by the difficulty you choose. To place a tower on the map just tap the tower you want then drag it to the spot you want it to stand guard. The longer you have a tower on the map the more experience it will earn, leading to different upgrade paths you can choose from to create bigger, badder, faster, more bloon-destroying monkeys than ever before!

There are a few additions to the mobile version, most notably a new tower and two special agents. There's also a monkey lab where you can purchase further upgrades to help facilitate victory. Fans of the browser version will be pleased to find the mobile release is as great, if not better than the previous release, and the best part is that you can enjoy a round or two in between classes, on a break from work, or even at three in the morning when you can't seem to entice Mr. Sandman to help you sleep.

As always, I'm disappointed that this is only for iOS. I would certainly PURCHASE this if it were for Android. Oh well.

Actually, Bloons TD 5 is now available for android devices. At the time of writing, it is also part of the recent Humble Mobile Bundle

Well, I love my android version of this beautiful game. I also downloaded a pc version which I use some cheats ( this is to try cool tower combinations). As for my strategy for special missions, I'm referring on this beautiful site. They discuss things properly.

I can't wait for the new version of this game.