If you've never played any of Ninja Kiwi's Bloons games, you're missing out. The dart throwing monkeys have been around for years now, and in the latest twist combine city building with the tower defense goodness you've come to love. In Bloons Monkey City (available in your browser or for iOS) you go behind the scenes to train, upgrade, and build a city for your monkey army to inhabit, all the while battling back the evil bloons from your lands. Why are the bloons so vicious? Nobody's sure, but I think it must have something to do with their association with clowns. 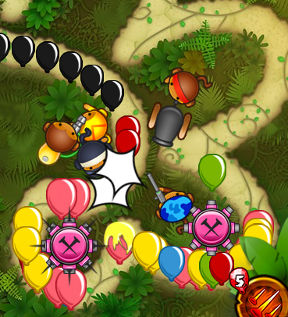 You start with a small village and just a few dart monkeys to your name. You need more land if you want to build a stronger army! Click on a spot of land outside the city walls to see the map layout, how tough the bloons are, and any tower restrictions, then tap attack if you decide you're ready to take it on. You start with a certain number of lives and cash, which increase every time you gain a level. Place your monkeys strategically, utilizing their strengths, anywhere outside of the track to decimate the enemy. While at first you'll have few choices, soon you will have many monkeys to place, with tougher and tougher bloons to go with it. Some maps may not be winnable unless you've researched the right upgrades, but since there's no penalty for losing, it can be fun to challenge yourself on really tough levels.

After you've captured a few squares, you'll have room to build structures which do various things, all of which are laid out in a helpful build menu. You have basic buildings, which give you more monkeys to use in battle, research buildings which let you upgrade your monkeys, and resource buildings needed to generate cash and power for your city. You've got to strike a balance between number of monkeys and upgrades for the optimal attack force. There's also a task book with objectives to complete which can help guide you if you don't know what to build next.

The game is entirely free for your iOS device if you don't mind watching the occasional video ad. Optionally, nearly every store purchase will disable the ads for good. You can buy premium currency (which can also be earned in-game) which speeds building construction and research, and lets you buy emergency back up during fights. There are also decoration packs for sale to spruce up your town. If Bloons Monkey City has a weakness, it's that it can start feeling the same. While there are a good variety of tracks, you do end up fighting on them multiple times. On the other hand, between capturing different types of land, the contested territory arena, and monkey vs monkey play, there's always something interesting going on. While the basic gameplay is nearly the same as previous games, the town building and new layouts serve to keep things fresh, and the large map and different challenges will keep you engaged for days.

Has no one really commented on this yet?
All I have to say is:

Following the Flash link leads to a mandatory sign-up page for Ninja Kiwi's website in order to play the game. Googling reveals only one other website hosting it (Kongregate) that also requires signing up.

I'm guessing that this has some sort of integral gameplay reason, but it's still disappointing from a long-time player of the Bloons series.

Also frustrating is that you only find out that the game requires a sign-up after it fully loads. This might account for the lower user scores. Nowhere on the loading screen, nor in the review is this brought up. Ninja Kiwi have their reasons, but I'm wondering why this isn't even mentioned by JIG? Either way...

...it's a small annoyance, but it is there.
I stand pretty firmly with flash game devs, and Jayisgames, but a disclaimer to this would've been nice.

I'm sorry, I didn't know. I played mainly on iPad after poking around a bit on Kong. I have a Kong account, so I didn't realize the game forced you to sign up to play.

Been playing bloons monkey city for a couple of weeks now got quite far but I can't find the upgrade building for the monkey village, is this solely on the mobile device or is it something the developers may have accidentally left out of the game?

It's Frustrating that on quick match pvp it finds matches that you need upgrades to fight. It should find someone that you can actually fight at your current level.