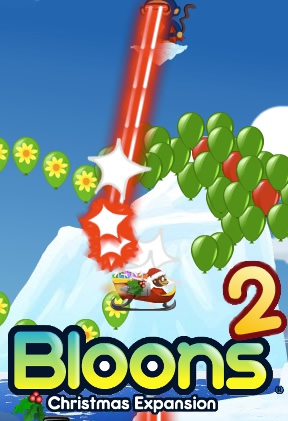 In this mouse-controlled game, simply maneuver your cursor around to aim, click and hold to control the launch speed, and release to throw your dart at a bunch of balloons, keeping in mind the effects of gravity. Did you pop anything? Well, good, keep going until you pop the required number of bloons for the level. Occasionally you'll pop a special bloon with its own rules, such as a bee bloon, which releases bees which follow your cursor and should be guided by same into popping other bloons. If you've played the predecessor Bloons 2, you'll recognize the new specialty bloons, some with clever seasonal reskins. For example, the monkey in a biplane is now flying a sleigh, and the pin bloon is now a sprig of holly. The music uses the familiar Bloons style in a medley of two Christmas favorites, "Jingle Bells" and "Joy to the World". Both take a while to repeat, and the way they switch back and forth also keeps the annoyance factor down. Separate mute controls for the music and sound effects are available, however.

While most of the game is focused on being fun and visually amusing rather than hair-yankingly difficult, there are a few levels towards the end that rank right up there with the best or worst (depending on your point of view) the series has to offer. You get five "super monkeys" to use over the course of the game (basically, your monkey turns into an eye-beam shooting machine of death, which is very satisfying if you've been trying to beat a level for fifteen minutes), as well as three "solutions". If you use a solution, the game shows you the level being beaten in-game. Interestingly, the solution doesn't always show the monkey beating the level perfectly, even on levels where this is possible. Once you use up your solutions and super monkeys, you have to pay to get more. However, don't forget about one more totally free option for getting through a level: on the level select screen, you can put on "unlimited darts" mode.

A lovely seasonal twist on the smash hit, the game doesn't break any new ground, but when the established ground is this good, it doesn't need to.

I prefer the simplicity of the original Bloons.

I understand the need to change things up, but this isn't doing it for me.

This is my first game with Bloons and thought it was pretty cool.

When I say "no, you may not store information in my flash player," it does NOT mean to keep asking over and over again.

Thank you and good day.

[It's not Mochiads that's asking, it's the Adobe Flash Player, and without sufficient storage allocated, Flash Player cannot save your games. Since this game is stored on the Jayisgames domain, it's competing with all other games hosted here as well. If you're running out of room with this game, you'll be running out of room with any other games hosted by JIG. I'm sorry for the inconvenience, but the best thing to do is to give Flash Player more storage. -Jay]

I think it needs to have some sort of a quality adjustment button. :| I don't have the best computer in the world so it runs rather slowly.

Is this game extremely heavy on anyone else?
I've tried it on two different, rather new, computers with windows Xp and Vista and on both of them its unplayable because of very low FPS.
Original Bloons 2 plays perfectly still :/