Play Chocolate's Bloodbath Avenue is the sort of zombie game old school arcade cabinets were made for... a vertical-scrolling action game that has you smash through waves of the undead on your way to a safe house on the other side of the city. You can choose to play as one of two characters, each with their own stats and unique skills, and the more zombies you dirtnap, the more skillpoints you'll earn to upgrade them, as well as cash to spend on new equipment in the store. 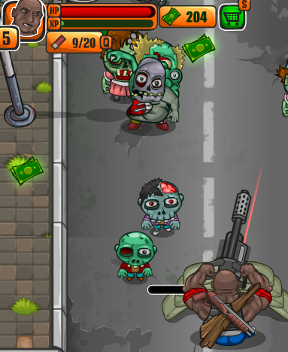 Bloodbath Avenue plays like a simplified, zombified Band of Heroes, or if you're like me and old and awesome, Pocky and Rocky. You use the mouse to direct your character around the scrolling playfield, and click to attack. [1], [2], and [3] activates your special abilities when available, [Q] switches between weapons, and pressing the [spacebar] will allow you to both pick up medkits and ammo, as well as pick up barrels to be tossed by clicking on the screen. If you die, you'll have to restart the stage over again (or replay others) but don't worry... you'll keep any cash or levels earned, as well as items bought.

Though the stages themselves need more variation between them to really keep things fresh, the different objective at the end of each one is a nice touch. Drive a car through a crowd of zombies, fend off an enormous wave with a mounted machine gun... it sort of underlines the simple yet giddily over-the-top arcade style the game is about, especially when combined with the quirky, cartoonish style. The biggest problem with the game, however, is that movement feels so slow and sluggish compared to how fast enemies can swarm or attack, which makes navigating obstacles while trying to fend off a bunch of flesh-eaters and zombie cats a guaranteed way to lose some health. Cash is doled out so stingily in comparison to the prices for items that you're forced to grind after a certain point to be able to survive the sheer number of swarms the game throws at you. I would up replaying the first stage, Dark Alley, over and over just to get the huge cash and EXP bonuses repeatedly since it was so short. Bloodbath Avenue is still a lot of fun, and even a great idea. It's just sorely in need of some tweaking to make it feel like it's challenging you rather than forcing you to grind.

Graphics are hilarious. I have almost finished the game in 'normal'.

One of the minor goals is to kill 5 zombies with another zombie. I haven't figured out how to do that.

At least on my machine (on Normal) too slow to enjoy the Bloodbath. Unlike a lot of these scrollers, there was basically no penalty for lingering at the top of the screen (save this one special area.)

Problems with edge enemies, which of course turns into your mouse cursor coming off the swf border.

You can pick up money with the mouse cursor, instead of waiting for the character.

You golf one into a row of others. Dunno how to do it, but it's a step back from a direct hit.

FYI the achievement killing with the Max Attack is using the 3rd attack (pressing '3'.)

Of course I hit an achievement of healing with less than 20%... and by the time I figured out how to safely do that, I made the mistake of swinging. And leveled up. And filled up health bar.

I restarted after a death, and although I was farther along the route, the achievements reset to the very first ones. At least I was rewarded for everything.

Was not prepared for zombie cats. Just in general. The humans, though... I guess this isn't an escort mission.

Grrr arrggh. 'course I missed one.

Unless I've missed something � rather annoying dealing with zombies who are behind you.

Spotted a typo in the review:

...I would up replaying the first stage, Dark Alley, over and over just to get the huge cash and EXP bonuses repeatedly since it was so short.

Thought you ought to know :)

Every so often I managed to get my weapons to stick on autofire - but I don't know how.

Does anyone else have a clue ?

Your mouse, and Flash, probably stuck. Hold down for auto-fire/attack.