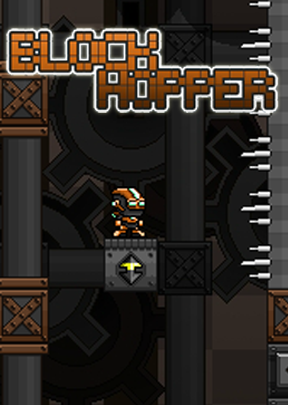 Up for a challenge? In BlockHopper, an innovative puzzle platformer from GreenPixel, you control an adorable little robot named Bit across 35 different levels and landscapes to ultimate victory. But here's the twist: this isn't just some run-of-the mill, jump over already-placed platforms to victory kind of game. Instead, you control the placement of platforms in the form of many different and ingenious blocks, each with their own separate logic and mechanics. Even if you do manage to beat the entire game, Blockhopper comes with a level editor, making the possibilities nearly endless.

The controls are straightforward: move Bit with the [WASD] keys. Press [spacebar] to stop time and enter block mode and click anywhere on the screen to place a block. Scroll through the blocks with [Q] and [E] and hit [S] to activate a goal or switch block. Thankfully, the game features one of the best flash game soundtracks in recent memory, by Starship Amazing, that will help sooth your frazzled nerves as you progress into the double digit levels. Because, let's not kid ourselves. This game is hard. Very hard. Many players will become frustrated by level eight and give up completely. BlockHopper is not impossible, each level has a clear solution, but you'll have to think outside the block to win.

Special thanks to developer GreenPixel for these video walkthroughs!

Special thanks to developer GreenPixel for these video walkthroughs!

It is not working for me. I'm on Lion OS, Chrome browser. It just loads a white screen.

Working for me in Chrome on Mac OS X. Try emptying your browser cache and make sure any browser extensions you may have installed are disabled (extensions sometimes conflict with Flash games depending on the extension). Then reload the game.

If you are still having issues, would you tell me what data center you're hitting by loading this URL in your browser, please? http://debug.netdna-cdn.com/

Works OK on my Windows Vista laptop running Chrome...do you use NoScript...that extension is particularly problematic...

It is working now; it may have been a server problem as I was on one I hadn't used before. Thank you!