Love is in the air and it's shaped like gigantic, fuzzy, eyeballs. Yes, the cute furry couple need to be united once again in ALMA Games', Blob's Story 2. Even if you haven't played the first Blob's Story (that can be solved with an easy click) you should know you're in for a delightful treat when ALMA Games comes into the mix, as they have given us the wonderful Monsterland: Junior VS Senior and Cat Around The World series. Blob's Story 2 continues on with the endearing simplistic puzzles of the cut-the-rope style physics. Slice the ropes that bind the eyeballs (and other miscellaneous items) to collect the beautiful flowers, avoid the rogue saw blades (there should really be a law about leaving those laying around), and cuddle those two eyeballs together to listen to their warm purrs of joy as you complete the round. It's so sweet and so darling and full of small details, like how once the lovers lock eyes they don't look away till they are together, who could pass it up? 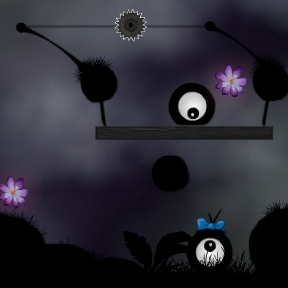 Continuing its trend with its parent game, all of the puzzles are rather easy. They are not as simplistic as the first one as it will be giving you a bit more of a struggle, due to it being slightly more focused on timing than just what order to cut the ropes. But it's safe to say you won't have to check your blood pressure with this game. In fact, with the soothing music and the charming floating hearts that appear above the lovers at each success, you may even find yourselves much calmer than you were at the start. Other than the slight raise of difficulty, and an intro to portals, there isn't much new to this second addition. They changed some colors, made the flowers 'pop' a bit more, and forced you to collect the flowers to continue the game play, which actually gives you a reason to collect them instead of just obeying your completionist side, but everything we loved about it before has stayed the same. And seeing that the last one warmed our hearts and filled our cheese meters that is good news for fans to hear.

WASD controls worked like control of gravity. The level design didn't seem like it was supposed to be that easy, it seemed more like that control was unintentional but I could be wrong.

I played the whole thing and never noticed that wasd worked. I agree I can't see that it would be intentional.

there must have been a bug, my comment of yesterday was deleted, this was that: It must use the exact same file than the first, which also exactly have the same amount of levels: never played it yet I have all flowers except on level 25, like for the first. At least there is no need to do a quick google to play the hacked version if a level is annoying to complete.

WASD controls must be debuging controls that were not removed in the final game. You can even use it in the menu. If you use them to move them in a teleporter once you won, you see something quite horrible.

To corroborate zzzzz's comment, the game seemed to think I had already completed all the levels. Very odd.