Playing Wingon Studios's arcade shooter Blitzy Blitz is sort of weird, because it feels exactly like the sort of thing my friends and I would have made up to play in the backyard when I was five. Atop a tiny horse that makes adorable clippy-cloppy sounds when you move, you fend off a massive air raid of enemy ships and troops using everything from a flame thrower to a massive laser beam. Silly and over the top? Sure, but that's sort of the whole point. Just use [WASD] to move, and the mouse to aim and fire, with either the [1], [2], and [3] or [Q] and [E] keys to cycle between weapons. (Watch each weapon's meter so it doesn't overheat!) Between stages, you'll spend the crystals you earn defeating enemies and talent points on valuable upgrades! Think carefully before you spend rubies, as you can only have one of each level of upgrade per tier for each weapon, and the choice is permanent. 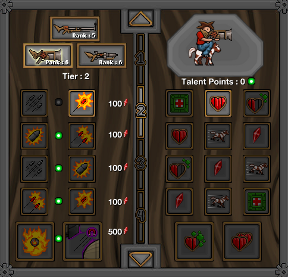 I've never liked the phrase "guilty pleasure" since it sort of implies you shouldn't like something for an arbitrary reason, so let's call Blitzy Blitz a glorious simple pleasure instead. Not as catchy, but apt, as from the game's goofy and deliberately campy premise and presentation to the increasingly hectic action, it's just fun. There are, of course, some frustrating bits... after the initial opening scene, the action feels almost painfully slow to ramp up, and being able to reset your talent points but not the weapon upgrades seems like an odd choice. More dynamic and unique boss battles would have gone a long way towards combating the feeling of repetition, but Blitzy Blitz is still an unexpectedly charming and happily bloodless shooter game that piles on the action. Even if there is still only room for one tiny pony in my heart.

Maxed Sniper out, almost maxed bazooka. Talent points went to regen if it was a choice, otherwise more rubies dropped.

Never died, or even came close do dying...

On a mac. I do not know why, but I could only get it to load on the game designer's site. http://www.wingonstudios.com/play/bitzy-blitz/
At least I got it to load.

Maxed all weapons. ENDLESS MODE CANNOT SATISFY MY BLOODLUST Begs to be expanded upon.